Opening a Bokksu box,a monthly mailing of Japanese snacks, is like cracking open a treasure chest for food-lovers: Under the bright orange lid is a hand-picked assortment of edible goodies made by Japanese artisans. You might sample a zesty Yuzu Sake Candy from Daimonji Ame Honpo, a 100-year-old candy maker in Kyoto; or Dondon Yaki, a peppery, tangy, crunchy senbei (rice cracker) named after the sound of the beating taiko drum; or a White Strawberry, a chocolate-infused freeze-dried strawberry, made exclusively for Bokksu. The contents are different every time but always represent the diversity and ingenuity of Japan's independent food businesses. Although subscription boxes have proliferated in recent years, Bokksu stands out from the rest: With more than 40,000 boxes being shipped to 100 different countries per month, their subscriber base has doubled every year since 2018.

Danny Taing, the founder of this fast-growing snack service, became obsessed with Japanese snacks during a one-year study abroad program in Japan. After study- ing psychology and Japanese at Stanford, he took a job as an account strategist at Google but then quit in order to live in Tokyo. At the time, he didn't imagine the move would be the inspiration for his future business. "I just wanted to experience the world and eat Japanese food every day," says Taing. He ended up staying for four years. He worked for an internet marketing firm, becoming fluent in Japanese, traveling extensively, and falling completely in love with the vast world of Japanese snacks and snack-makers. But as much as Taing loved living in Japan, as a gay man, he found he was unable to be open about his full identity — a reality that took an emotional toll. "I had these great experiences, but I had to actually go back in the closet. I quit and moved back to New York so I could be my full, authentic self and pursue a new path."

Back in the States, the subject of identity reared its head again, this time while look- ing down the snack aisles of supermarkets. There were big Japanese snack brands like Pocky to be found but nothing near the variety he had experienced overseas. "As an Asian American moving back to New York City having lived in Asia for four years, all of a sudden I was feeling invisible again."

Taing saw a chance not only to bring new tastes stateside, but also an opportunity to bridge cultures. In 2015, he launched Bokksu, a subscription snack box with a mission to help traditional Japanese snack-makers sell their goods worldwide. Taing aims to showcase 10 to 14 artisans each month, of which two to four are making products exclusively for Bokksu. Gaining the trust of centuries-old family businesses to take their products overseas was not an easy task, but Taing's commitment to having direct, personal relationships with each vendor made Bokksu what it is today. On the Bokksu site, you will find the stories of snack-makers like Mikifusa Honma, president of Honma Anpan, a fifth-generation maker of wagashi (sweets typically paired with tea).

Over the past few years, Taing has been expanding. In 2018, he launched Bokksu Market, a one-stop e-commerce marketplace for Japanese handcrafted snacks and home decor, and in 2021, it grew to include Bokksu Grocery, an online store for everyday Asian pantry items that ship directly from Japan. The company recently raised $22 million in series A funding. Taing hopes to use the investment to create a community and membership model where people can access and get to know Asian culture through different channels. Thanks to his vision, an authentic taste of Japan is just a box away.

This freeze-dried, white chocolate–infused straw- berry is Taing's favorite Bokksu snack of all time and also its best-selling product.

A new variation of their flagship snack product, the Black Strawberry is infused with dark chocolate.

Made by one of Bokksu's closest senbei partners, this edamame version of the rice cracker is light, crunchy, and the perfect pairing for tea or beer. 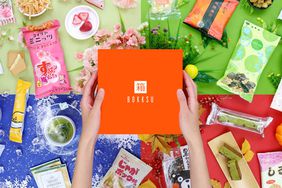 This Japanese Snack Box Subscription Recreates the Joy of Travel