Nadir Güllüoglu is nothing if not proud of his legacy. And maybe a little floury, too.

At 68 years old, he’s a man who’s perfected his craft over more than 50 years of dedicated work. Though really, it was likely his destiny. After all, he’s the 5th generation to take up the family business, further building what could arguably be the greatest baklava dynasty in Turkey, if not the world. It’s so revered that their sweet treats are now part of the exclusive (and world's first) Baklava Butler Experience at the Shangri-La Bosphorus.

On a fall day in Istanbul, I opened the curtains in my lovely little suite at the Shangri-La, only to be met with clouds and rain. Not to worry, as I had a magical key in hand. The key allowed me to go downstairs and request a delightful mid-morning treat: Baklava and a Turkish coffee. I sat in the luxurious lounge, filled with deep and cozy sofas and splashed with turquoise touches, and waited for what I thought would be just another bite of an old classic — until I bit down into the most delicately balanced mix of honey, pistachios, ultra-thin and crispy filo, and spice upon spice.

Chefs Share the 16 Desserts Every Home Cook Should Know

“Can I meet the baker?” I asked, only to be told we’d have to drive down the block to meet him, as these came freshly baked from Güllüoglu.

So drive we did, to the eponymously named Karaköy Güllüoglu bakery just before the afternoon shift rolled in. As we waited for his staff to return from a well-deserved lunch, Güllüoglu took a seat behind a massive dark wood desk. Güllüoglu isn’t a small man by any measure. Rather, he’s a chest-puffed, tall, and strong forearmed presence — a key physical feature we’ll discover more about later. Yet, sitting there, he looks positively diminutive as he’s nearly enveloped by all the awards and accolades lining the shelves behind him, each praising his family’s recipes and business acumen. It’s evident he takes his legacy seriously and that he’s profoundly proud of what his family has created.

“We’ve been doing this since 1843,” Güllüoglu’s son, Murat, who both works at the bakery and will mark the 6th generation of the family to run the business one day, shares. “The Güllüoglu name is very attached to baklava.”

Murat explains that his family’s story begins in Gaza, where the baking began, and was sustained for three generations before his grandfather moved to Istanbul and brought the business there.

“I had options. I had other things to do, but I chose by myself to be here,” Murat says, noting he never felt pressure from his father to become the 6th generation to take on the brand, nor will he pressure his children to do the same. Instead, he knew he wanted to be here himself.

“I could do something else,” he says. “But for me, this was something precious.”

Without much warning, Güllüoglu stands, and his son motions it’s time for us to stand and follow him too, down the few flights of stairs straight into their inner sanctum. AKA, the bakery.

From the outside, it looks as though the family has captured the cumulus cloud outside. But as you get closer to the foggy scene, you realize it’s just the flour flying as the family’s staff roll out sheet after sheet of filo dough.

Stepping inside, we’re immediately enveloped in both the sweet scent of all the ingredients that make up these perfect little bites, including the intoxicating smell of warm butter, and within moments, covered in flour ourselves. Güllüoglu lets out a gruff introduction, which causes his staff to instantly stop what they’re doing and bow in respect before returning to their work. Güllüoglu takes us to the first station, where he flicks just the right amount of flour onto the stone surface and plunks down a heaping ball of filo. As if nothing at all, he rolls it out, tossing a bit more flour as he goes to make it as thin as possible, showing off just why those substantial forearm muscles are so critical to the job. And like that, he’s done, proudly lifting the dough to show just how paper thin he can get it — so thin that when his bakers placed a sign behind the sheet, you could read every word.

Next, it’s on to the filling stations, where the Antep pistachios are taken out of cold storage to ensure their freshness, each one shining like an emerald as it gets layered on. In total, each batch gets 40 layers of filo and 15 layers of filling in between. The family and their team of 80 chefs say between 4 a.m. and the end of their day, they will make an astonishing two tons of baklava. And they do it every single day.

Güllüoglu then takes us to the final stop — cutting the finished product as it comes fresh out of the oven. After ladling on one more helping of golden butter, Güllüoglu invites me to get close…closer…even closer… to hear as he takes the knife to the filo. He’s listening for the distinctive “cush” sound, letting him know it’s just right. We then sat together and, despite not sharing a language, knew exactly what one another was thinking as we bit into each bite. That this small moment is pure happiness.

It’s a feeling guests at the Shangri-La get to experience now too, as following my journey back (and discussing it with every single person who would listen in the lobby), the team has expanded its already stellar baklava butler program to include a tour of the bakery.

Guests who want to see it all firsthand can book the experience and be chauffeured from the hotel with a private driver for an exclusive two-hour baking workshop to learn every stage of the process too — from opening the dough to creating the famous shape to the proper rolling technique and on to baking. Those who want to take home a box can purchase as many boxes as they’d like at the end. Finally, guests will return to the hotel to be served their very own hand-rolled baklava with Maraş ice cream, all served by the hotel’s baklava butler with a cup of Turkish tea or coffee too.

Before leaving one another, Güllüoglu says he hopes many people will come to experience his family’s work for themselves and take it back to their friends and family, too, simply adding, “Eating sweets brings us joy. We can all come together over sweets.”

The Baklava Butler Service is available only for Shangri-La Bosphorus guests every day except Sunday. Reservations must be made at least one week in advance. 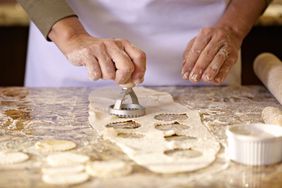 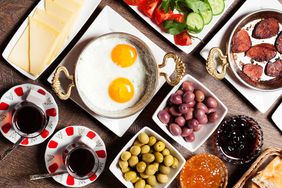