What Is Adobo? The Answer Is as Complex as the Dish Itself

From the Philippines to Puerto Rico and beyond, here is everything you need to know about adobo.

You may have eaten or seen several dishes that differ in flavor and presentation but are all called adobo. It’s not a mistake; adobo is a dish with many permutations, all of which should be celebrated. The word adobo is a derivative of the Spanish word adobar, which translates to marinade. Spanish colonizers carried the word “adobo” to the regions they conquered, so adobo means something different depending on where you are in the Spanish diaspora. In some places, adobo is a dry seasoning rub. In others, the spices are combined with vinegar and fresh ingredients to create a marinade called adobo. In the Philippines, it’s neither of those things. Confused? Don’t be. Better understanding these dishes and their nuances will help you be a more informed cook and consumer. Here’s how adobo traveled the world.

Spanish adobo is a long-marinated protein

Adobo has its roots in prehistoric times. Vinegar was used by early cooks to store and preserve meat before cooling and refrigeration were available. While this concept was used by indigenous people around the world, the Spanish were the people to call it “adobo.”

In Spain, the adobo you’ll find on restaurant menus refers to the process of marinating raw protein in vinegar, spices, and aromatics including pimentón, fresh garlic, and bay leaves. Wine and/or olive oil often make an appearance. The meat marinates up to a couple of days and is then cooked, resulting in a deeply flavorful protein. As the Spanish colonized much of the world, they took the technique, which can also be used for food preservation, with them.

Caribbean adobo is both a dry spice blend and a marinade

The Spanish landed in the Caribbean in the late 1490s. Their first stop was what is present-day Dominican Republic and the islands that surround it, Puerto Rico and Cuba.

Today, all over the Caribbean, adobo is widely used as an all-purpose dry spice blend, consisting of paprika, oregano, cumin, garlic powder, onion powder, and turmeric. It is a beloved staple in most Puerto Rican home kitchens. This variety of adobo is also used as a dry brine, added to proteins prior to cooking to amplify flavor. It is also added to sauces like mojo or sofrito. You’ll also find wet versions, mojados, for which vinegar or sour orange juice is added to the dry spices to make a paste. The paste is used to marinate proteins, similar to the Spanish method.

“Every Puerto Rican household that I’ve ever been to has adobo in it, and if they don’t … run,”  jokes chef Eric Rivera. “We pretty much treat it like salt. There are different ways you can add it, if you’re marinating something or at the beginning of making a one-pot dish, like a rice dish, vegetables, or a meat dish or something that you're braising. [Adobo] pretty much starts the party. It’s rare that you’ll see it used as a finishing salt.”

Rivera has adapted how he uses adobo in his own cooking for pop-up events he hosts around the country and in recipes like his Mamposteao with Shrimp and Adobo. He uses it as a salt, a seasoning, and he has even added pink salt to some blends so he can use it to cure meats.

Mexican adobo is a wet marinade

After the Spanish conquered Mexico in 1519, they brought adobo to kitchens there, this time as a vinegar-based marinade similar to the version found in Spain. They adapted adobo to use ingredients endemic to the region, using local chilies like ancho and guajillo instead of pimentón. In her recipe for adobo, chef Claudette Zepeda toasts dried chiles, then rehydrates them in boiling water before blending them into a paste with vinegar to make the adobo for her Birria Tacos recipe.

Another staple of Mexican cooking is chipotle en adobo, which are smoked and dried jalapenos that have been rehydrated and stored in a marinade of tomatoes, chiles, garlic, vinegar, and spices. The result is a spicy, smoky, deeply flavorful ingredient that is added to salsa or to a pot of cooking beans, soups, and stews like pozole to deepen the flavor. The sauce can be used as a marinade by itself or combined with other ingredients. You can purchase canned chipotle en adobo in many supermarkets but you can also make it at home.

Filipino adobo is a stew

In the Philippines, the concept of adobo was around long before the Spanish arrived in 1521. Like the native people of the Iberian Peninsula, indigenous people in the Philippines had long used vinegar and salt to preserve proteins. When Chinese traders arrived in the Philippines in the 9th century, they brought soy sauce, which was soon added to the marinade (the earliest iterations of Filipino-style adobo are referred to as “white adobo,” as they did not include soy sauce).

When Spanish colonizers arrived and witnessed the similar preservation method, they named the Filipino method after their own adobo. This technique can also be seen in kinilaw, a Filipino style of ceviche, for which the raw fish is “washed” with vinegar prior to being placed in its final vinegar or citrus marinade.

As in Puerto Rico, adobo is beloved in most Filipino households; it’s the unofficial dish of the Philippines, even as it varies by region or household. Most modern-day Filipino adobo is prepared with vinegar and soy sauce. Some families keep it simple, with vinegar, soy sauce, garlic, bay leaves and black pepper. Others add fresh ginger or coconut milk. The proteins also vary; most commonly, you’ll find chicken or pork adobo but it can also be made with squid, fish, or vegetables.

Adobo in South America and Beyond

Because the Spanish conquered the Incan Empire, you’ll also find adobo in Peru. Peruvian adobo is similar to the Spanish version and is traditionally cooked in a clay pot. In Uruguay, the adobo is similar to the Puerto Rican dry spice blend. In Portugal, adobo is called carne de vinha d'alhos; you’ll find variations of the Portuguese iteration in the countries they passed through and colonized; pork vindaloo in Goa, India, is a variation on this technique. 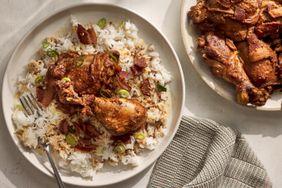 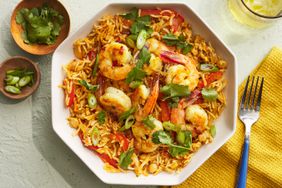 What to Do With Chickpeas That Isn't Hummus