This tuna tartare is loaded with flavorful Asian spices and ingredients.

This tuna burger offers the flavors of a Niçoise salad, on a bun.

A recipe from Giada De Laurentiis, from the 2007 Classic in Aspen.

Christopher Lee's simple grilled tuna and crispy-chewy scallion pancakes are terrific, but what makes the dish so sensational is his kimchi, a version of the traditional Korean pickled-vegetable condiment. Unconventionally sweetened with honey and orange juice, it's utterly original and completely delicious.

Hearty-healthy tuna is a high-protein source of omega-3 fatty acids. Andrew Murray pairs it with a vibrant salad made with crisp snow peas, a good source of B vitamins and vitamin C.

A recipe from Emeril Lagasse, from the 2007 Classic in Aspen.

Salade Niçoise is one of the great summer dishes of Southern France. It's the centerpiece of a party that's all about sunny Mediterranean style, from the wine to the plates to the tea towels.

Nan McEvoy created this salad after falling in love with the incredible olive oil-poached tuna prepared by her friend Paul Bertolli, the former chef at Oliveto's in nearby Oakland. McEvoy uses albacore tuna here, but any fresh tuna will do. In addition to spooning the salad into avocado halves, she also uses it as a sandwich filling and a topping for crostini.

Big, creamy butter beans give a tuna and celery salad terrific heartiness. The salad would also be delicious spooned over slices of warm grilled country bread.

"In Samoa, insanely good tuna is cheap and plentiful; a 20-pound fish might go for $5," says Andrew Zimmern. "Samoans season raw tuna with coconut milk, lime and fermented sea cucumber intestine, called se'e. At home I skip the se'e in favor of fish sauce to give the dish a salty balance."

A former Greek philosophy professor, Abe Schoener of The Scholium Project in Suisun Valley, California, has a cult following for his experimental methods. One of Schoener's famous wines is The Prince in His Caves, a Sauvignon Blanc he ferments on its skins, then ages in oak. Wine director John Locke of Soif in Santa Cruz, California, thinks the luscious, funky wine is best with funky flavors, like in the citrusy soy sauce here.

Lidia Bastianich buys spectacular whole bluefin, then someone in her restaurant kitchen cuts it to her specifications. This recipe is already incredibly simple; just be sure to buy sushi-grade tuna fillets.

Hosea Rosenberg created this quickly seared tuna recipe in 2001, when he was head chef at Boulder's Dandelion restaurant. It immediately became his dad's favorite dish. He spikes the ginger cream with Sriracha, the spicy red Thai chile sauce.

The mousse can be refrigerated overnight. Bring to room temperature before serving.

It seems that every Middle Eastern household has its own version of tabbouleh. Some people prefer the salad made with mostly herbs and greens; others include tomatoes; and some add spices like Aleppo pepper, sumac, and allspice. Our version, made with a little tuna, becomes a main course. Serve it as is or stuffed into pitas.

Despite its 3,000-year history of catching wild bluefin tuna, Spain’s tuna culture has largely been limited to canned and salted tuna products. This luscious dish, a staple of southern Spain, is one of the exceptions. 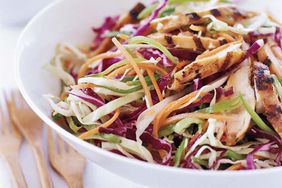 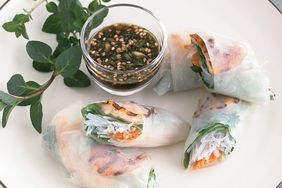