America is becoming a nation of sushi connoisseurs, able to discuss the difference between o-toro and chu-toro. Senior Editor Ray Isle looks at the stats, the buzzwords, the masters and mavericks, and the do's and don'ts.

America has become a sushi nation.

Sushi is a relatively recent arrival in the U.S., making its first small inroads a decade or so after World War II. A sashimi dinner in the 1950s at Miyako in San Diego, if you knew to go there, would run you $1.25. By the mid-1970s the chef at Tokyo Kaikan restaurant in Los Angeles had invented the California roll.

The number of sushi bars in the U.S. quintupled between 1988 and 1998, and has kept on growing. Since the turn of the millennium, sushi has thrived at the heights of American cuisine, with classicist sushi chefs shipping in rare fish from Japan and avant-garde chefs bending tradition daily. And, in what is perhaps the ultimate compliment, American-style sushi has emigrated back to Japan—though Americans might feel strange ordering a Nixon roll in Tokyo.

Sushi rice should be Japanese short-grain white rice seasoned with a mixture of rice vinegar, sugar and salt. Wasabi comes from a plant related to the mustard family; a master sushi chef will grate it himself. Gari is ginger pickled in rice vinegar, sugar and salt. Japanese soy sauce, or shoyu, is made from wheat and soybeans fermented with koji, the same mold used in fermenting sake.

Highest reported price ever paid for a tuna: $83,500, in 1992
Number of individual servings produced by the highest-priced tuna ever sold: 2,400
Length of longest sushi roll ever made, in feet: 4,381
Number of seconds it takes a bluefin tuna to accelerate from 0 to 50 mph: about 3
Number of seconds it takes a Porsche 911 GT3 to go from 0 to 50 mph: about 3
Number of seconds it takes an auctioneer at Tokyo's Tsukiji market to sell a tuna: about 3
Value of seafood moved through Tsukiji each day: $2.7 million
Weight of a toro (fatty tuna) hand roll at Manhattan's Monster Sushi, in ounces: 5.1
Pounds of tuna sold at Manhattan's Monster Sushi (on 23rd Street) in 2004: 14,600
Number of sushi restaurants in Lexington, Kentucky: 1
Number of sushi restaurants in greater Los Angeles: 276
Number of rice balls a Tomoe MSR-3000 sushi machine makes in one hour: 3,000
Number of sushi pieces Masa Takayama of Manhattan's Masa makes in one hour: about 200
Price of a 12-piece sushi dinner at Randalls supermarket in Houston: $4.69
Price of an omakase dinner for one person at Los Angeles's Urasawa: $250
—Researched by Jen Murphy

Nori Seaweed, harvested primarily off the coast of Japan, that is dried, roasted and pressed into sheets.

Awase-zu The seasoning added to cooked short-grain sushi rice is made from rice vinegar, sugar and salt.

Sashimi Sliced raw fish without rice; sashimi should be eaten with chopsticks rather than fingers.

Nigiri sushi A bite-size mound of vinegared rice with a similar-size piece of fish, shellfish or other topping.

Maki sushi Rolled sushi; basically, a sheet of nori wrapped around rice and raw fish (or other fillings).

Temaki sushi Known as a hand roll; the nori wrapper is rolled around various fillings into a cone shape.

Omakase The root word means "to trust"—the chef serves you whatever he or she likes. No menus.

These five chefs belong with Masa Takayama, of New York City's Masa, in the pantheon of America's top sushi classicists.

MORIHIRO ONODERA OF MORI SUSHI Mori, a perfectionist among perfectionists, hulls his own rice every day; his choice of fish is equally exacting, featuring rarities like sweet, rich buri (wild yellowtail).

Washington, DC TAKASHI OKAMURA OF MAKOTO The focus is the dishes of Japanese kaiseki, but Okamura's sushi is just as exquisite.

Sushi chefs in the U.S. have long pushed boundaries, most recently borrowing ideas from an eclectic range of cuisines. Along with Masatoshi "Gari" Sugio of Sushi of Gari in New York City, here are some of our favorite iconoclasts.

New York & Los Angeles NOBU MATSUHISA OF NOBU & MATSUHISA Nobu opened L.A.'s Matsuhisa in 1987, shocking the country with his deft mingling of Japanese, Peruvian and European ingredients. His influence now extends far beyond the dozen or so restaurants that carry his name.

Atlanta SOTOHIRO KOSUGI OF SOTO JAPANESE RESTAURANT Kosugi might wrap sea urchin with a thin slice of sashimi squid, then nori, to mimic the appearance of a real sea urchin.

Chicago TOYOJI HEMMI OF TSUKI In this cool industrial space, Hemmi bends the rules with creations such as spicy tuna maki with pine nuts, pistachios and rosemary, topped with ginger paste.

Dinner at Masa, the Manhattan restaurant owned by chef Masa Takayama, is a singular experience. In a templelike room with only 26 seats, Masa might fashion 25 courses over three hours, from lobster and foie gras shabu-shabu to classical sushi. The cost is over $350 per person, but the fish is the finest anywhere.

At Sushi of Gari and its new offshoot, Gari, in Manhattan, chef Masatoshi "Gari" Sugio, opposite, specializes in innovative flavorings that never overshadow the taste of the fish. Among his 130 radical inventions: tai salad (Japanese red snapper with microgreens, pine nuts and a lotus-root chip); sautéed foie gras with balsamic mousse; bluefin toro with ponzu mousse; marinated tuna with pine nuts on fried nori; marinated tuna with tofu sauce; squid with shiso flowers. 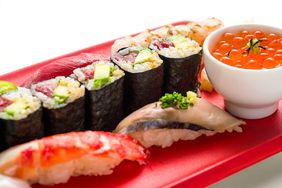 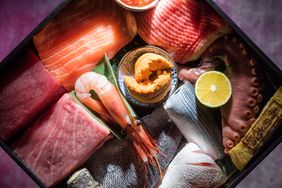 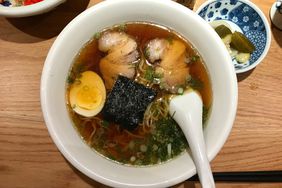 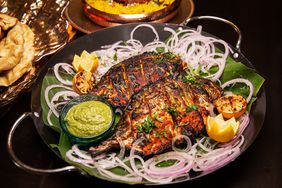