This elegant, modern take on the saketini was created by Kenta Goto, owner of Manhattan's Bar Goto and Brooklyn's Bar Goto Niban. Goto uses aged genshu sake and gin in the drink, and garnishes it with a salt-pickled sakura, or cherry blossom.

We've come a long way from the saketini, the often overly sweetened, sake-based cocktail whose popularity peaked in the late 1990s and early 2000s. When Kenta Goto, owner of Manhattan's Bar Goto and Brooklyn's Bar Goto Niban, was bartending in New York City in the aughts, he decided that the formerly trendy sake- and-cucumber concoction needed an upgrade. What if, instead, drinks actually highlighted the beauty of Japanese ingredients? "I thought, 'Somebody needs to do something,'" he says. "I started feeling I should be the one."

His solution for reinventing the saketini is as gorgeous as it is delicious. Goto serves the elegant and refined Sakura Martini at his NYC-based bars. Built around the fruity Ryujin Kakushi Ginjo Namazume sake, Goto's Sakura Martini reverses the proportions of the classic cocktail. "We use the higher-proof spirits just as support," he says. Goto's choice in sake for this Sakura Martini—a caramelly, aged genshu— lends itself to the delicate, fruit-forward aroma of this cocktail. Because Namazume sake is pasteurized just once instead of twice before bottling, it is fresh and floral flavors are preserved in the bottle. This delicate and smooth martini is garnished with a salt-pickled sakura, or cherry blossom, in place of a traditional martini olive. Though cherry blossom season is fleeting, everything need not be fresh for this cocktail: sakura are washed in plum vinegar and salt-preserved for availability year-round from Chinriu Honten ($16, amazon.com). The flowers offer a "hint of floral salinity" to the cocktail, playing off the briney flavors of classic martini garnishes. "And," Goto says, "presented in the glass, it looks as if the flower is blooming."

Salt-pickled cherry blossoms can be found in Japanese grocery stores or online at kokorocares.com. Maraska Maraschino Cherry Liqueur is a clear liqueur made from Croatian cherries; order from totalwine.com. 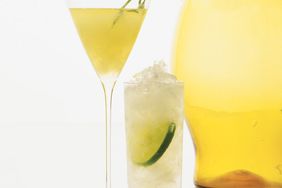