Chef Way Alaskan halibut is the star of this dish, served with labor-intensive lobster dumplings and topped with a warm tomato-water vinaigrette. To make the tomato water, a clear and intensely flavorful liquid, Shawn McClain blends heirloom tomatoes with sea salt, then strains the mixture through a cheesecloth. Easy Way We use local halibut from the fishmonger and omit the lobster dumplings. Instead of making tomato water, we coarsely chop heirloom tomatoes for a fresh, chunky tomato vinaigrette.

F&W Star Chef » See All F&W Chef Superstars Chef Shawn McClain of Green Zebra in Chicago and Sage in Las Vegas tells Food & Wine about his favorite cookbook of all time, the exceptional sparkling wine he loves to give as a gift and his famous foie gras custard brûlée. What are your favorite holiday gifts? Anything handmade, from preserves and jams to pickles and candies. Although to be honest, I’m more of a sucker for receiving candies than giving them—I can do the pickles and the preserves, but I don’t delve too much into pastry. Pastry requires the left side of the brain, or right side, whichever side of my brain I don’t use much. Champagne [or sparkling wine] is a great thing to buy—and if you can get a magnum, even better. Roederer Estate is fantastic, especially for the price. I also like Ruinart and Billecart-Salmon. Of course, if you can do a Dom [Pérignon], people will feel even more special. But there are so many good Champagne houses, it’s nice to search out smaller ones; even at a big liquor store, someone’s usually walking the aisles who can give you insight into smaller producers. What’s your favorite holiday cocktail? Scotch. I’ve just started to get back into it, and now I’m turning into my dad. Coming from the Midwest, the winters can get so cold, the weather definitely lends itself to a nice cozy sitting-by-the-fire kind of drink. About six years ago I bought a private Scotch collection of about 150 bottles, thinking I’d resell it to make a small profit. But I never did, so now I’ve started opening them. Some are great, some are not as good, but they’re all interesting. Gordon & MacPhail is not a name that you hear a lot now, but they’ve been in business more than 100 years and have bottled some great single malts; there’s some excellent vintage ones from the 1960s and ’70s. There’s one 10-year Laphroaig bottled back in the early ’80s. I don’t know how well Scotch ages in the bottle versus the cask, but those older bottles are kind of incredible: Really mellow and caramelly, so something happened to them. I’ve opened a couple that tasted like burnt rubber, so those were a little off. But it’s been a fun process, to get to know them, and to pour a glass and chill. Can you share one great entertaining tip? No matter the season, candles add warmth and coziness to a dinner or cocktail party. I like big pillars the best; we use a combination of pillars, tea lights and tapers, and even the battery-operated ones that flicker to look like candles. They’re impressively candle-like. We’ll set those on our coffee tables and credenzas so we don’t get so stressed about burning the house down. Another tip: Serve batch cocktails so you’re not tied to the bar. My Pomegranate Punch works well; if you need pointers on picking others, taste all of the ingredients to make sure you like them all. That Pomegranate Punch won’t be something you love if you’re not a big sparkling wine drinker; go for flavors you like. What are your 5 top don’t-miss places to visit on a holiday trip to Michigan, where you spend yours?

Apple Charlie’s Orchard, in New Boston, is a great place to take the kids. They have a pumpkin patch with more pumpkins than you could ever know, a petting zoo, hayrides, a cider mill and an old-fashioned doughnut-making machine, and they sell hot cider and doughnuts. Kids love it, and it’s packed from September past Thanksgiving. The Henry Ford Museum & Greenfield Village, in Dearborn. The museum has interesting displays on American manufacturing, with everything from Rosa Parks’s bus to JFK’s presidential limo. But museums aren’t always the best for the very young, so with our small daughters we like to go to the village behind it. It has something like 60 buildings belonging to some of our most famous inventors, like Thomas Edison’s workshop and the Wright brothers’ bicycle shop. Walking through it feels like a step back in time. The best part is they do holiday programs from trick-or-treating to Christmas holiday decorations. The Detroit Athletic Club is a warm and cozy place to enjoy a holiday dinner with family and friends. It’s a historic club, so they serve a traditional Continental menu with mains like lamb chops and steaks. But it’s less about the food than the ambiance and history. It’s long been the preeminent hub of Detroit life, with a very affluent membership, so it shows what Detroit once was. It’s a beautiful old building with great art, fireplaces and tapestries. We go a couple of times a year with our extended family, we get all dressed up, and it’s usually a big holiday party in there. The Somerset Collection Mall, in Troy, is a nice shopping mall, if you can put “nice” and “mall” in a sentence together. I usually find myself spending a lot of my time there before Christmas. They have everything from Neiman Marcus to Saks, Nordstrom and Macy’s. They deck out their atrium with holiday-themed decorations, and they usually have some kind of Santa”s Workshop. Rugby Grille in Birmingham’s Townsend Hotel is the perfect place to take a break from holiday mayhem. Birmingham is one of the towns surrounding Detroit that has the most individual character. The Townsend Hotel is this small quaint hotel that hosts the likes of Paul McCartney—anyone coming through Detroit usually stays there. The Rugby Grille is this fun, wood-paneled traditional spot with hearty food—great burgers and their onion soup is delicious, I get that a lot.

What’s the dish you’re best known for? The foie gras custard brûlée is hugely popular at my Las Vegas restaurant, Sage. It’s probably one of the only dishes that’s remained on the menu since we opened. It’s a custard made with only foie gras, cream, egg yolks, brandy and a few spices, like allspice, coriander and white pepper. It’s baked and then sugar-in-the-raw is brûléed on top. We serve it with seasonal accompaniments, from stewed sour cherries to nuts to brittles, and serve it with a little salt-and-sugar brioche. We also make a torchon of foie gras, which we freeze and then finely grate on top like foie gras snow. It is good, I’m not going to lie. It’s incredibly decadent, as you can imagine. What’s your favorite cookbook of all time? It’s changed depending on where I am in my career. As a young cook, I was drawn to the first modern chefs’ books like Charlie Trotter’s; the visuals helped me understand their styles almost more than the recipes. Then maybe 10 years ago I got into European cookbooks by Spanish and British chefs. Obviously, Spanish cooks have a huge reputation for avant-garde cooking. But as much grief as England gets, I found a lot of chefs there doing things before our contemporaries here in the States, British forerunners like Anton Mosimann and Nico Ladenis, and of course, Marco Pierre White. But now if I were going to pick up a book, it would probably be something by Lidia Bastianich or Thomas Keller, someone doing simple, well-executed food. These days I love things that are simpler and less complicated. What’s one technique everyone should know? Braising. When people cook something à la minute, whether it’s a steak on the grill or a piece of fish in a pan, people know how they like it, and everyone does theirs a little differently. Braising is more specific, and requires a more exact way of doing things. This is a cliché but the quality of the ingredients is the most important: Get good meat from a good vendor. And use the best ingredients to braise it in, too: best-quality vegetables for your mirepoix, and a homemade stock. I like to braise with a blond veal stock or a dark brown chicken stock, with browned bones and mirepoix. We also add body to ours with turkey necks and chicken feet. I actually prefer chicken stock to veal stock because it gets less gelatinous as the liquid reduces and concentrates. Then I’d say pay attention to the details, and don’t take shortcuts: If you’re going to sear something, make sure to take the time to give it a really good color. Add enough liquid to cover, but don’t submerge it in a soup; you want to maximize the flavor the liquid gives the meat, and vice versa. To stabilize the effects of the heat, and not lose too much liquid from evaporation, we also like to make a “lid” of parchment paper to rest right on the surface, as well as an actual lid. If you’re going to braise in the oven, check the temperature with your oven thermometer, don’t trust just what your oven says on the dial; 5 degrees over 10 minutes isn’t going to matter much, but 5 degrees over an hour and a half will make a big difference. And then braise just until it’s done. People tend to overcook it, and forget that the meat will continue to cook in its own juices. When you prod it with a fork, it should definitely be fork-tender, it should give way and the fork should slide back out easily, but it shouldn’t fall apart. If you’re bringing it straight from the oven to the table it should be a little more tender than if you’re letting it reabsorb some of the liquid and reheating it later or the next day. 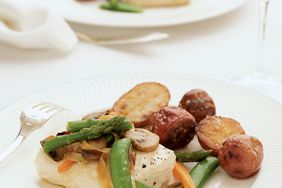 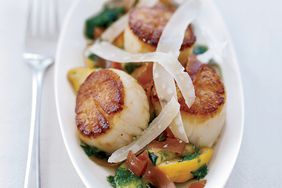 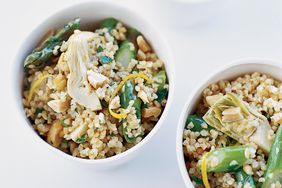 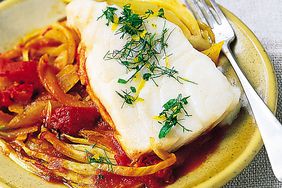 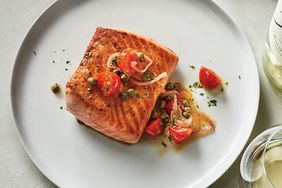 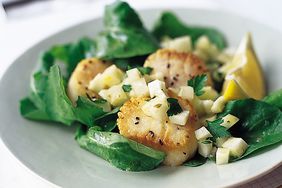 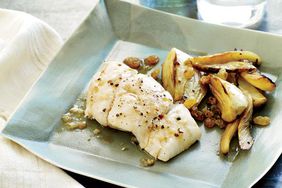 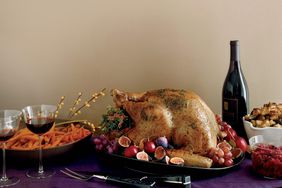 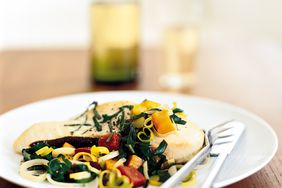