You're familiar with steaks aged for a couple months, but how about 10+ years?

If you stop by a nice butcher shop in your neighborhood, you'll likely find aged rib eyes and porterhouse steaks somewhere between one and two months old. A sixth-generation butcher from Northeastern France, though, would scoff upon hearing about those infant steaks. OK, maybe he wouldn't scoff, but he would definitely tell you about his own aged côte de boeuf, which predates most of the kids at your local middle school.

Using a method thought up by his father and grandfather, Alexandre Polmard blows air over his steaks cut from his Blonde d'Aquitane cattle at speeds of almost 75 miles per hour and temperatures of -45°F to cause the meat to "hibernate." And Polmard lets them hibernate for up to 15 years. According to Chef Fabrice Vulin, formerly of Caprice in Hong Kong (one of just a few restaurants that Polmard will sell his prized vintage steaks to), the result is a steak you barely even need a knife to cut.

CNN caught up with Polmard in 2017, who had his free-range cattle on full display. He was even building a new abattoir set to slaughter only four cows a day. The butcher told CNN, "Here [the cows] are in the open air, living in forests and on parkland. There are shelters they can choose to visit in case it rains or snows. It's really five-star accommodation."

Considering the price tag, we would hope so. At the time of Polmard's interview, a 2000 vintage rib steak cost $3,200. But for many people, it's worth it. There is reportedly a months-long waitlist for the opportunity to buy some. If you are in France you can dine at a Polmard House restaurant. Otherwise, visit his boucherie (butcher shop) in the Saint-Germain neighborhood for the prized meat. For anyone who is put off by the idea of eating a steak that is well over a decade old, Polmard features plenty of meat aged for the more typical 28 to 56 days. But come on guys, if you're going to get an aged steak, go all out. 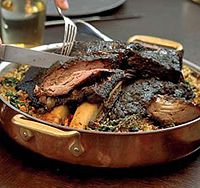