The ongoing experiment is attempting to mimic carbon dioxide levels grapes might face in 2050.

Perhaps one reason humanity seems willing to neglect global warming is that, for the vast majority of people, climate change doesn't yet affect their day-to-day life. Wine, however, is extremely susceptible to these changes. In many ways, the idea of "terroir" in wine is climate: This patch of ground is able to produce this kind of grapes because of its unique environmental factors — including elements like temperature and air quality. As a result, can studying wine and wine grapes potentially serve to help illuminate climate change's effects?

Quartz's Michael Tabb traveled to Germany to speak with Dr. Hans Reiner Schultz of Hochschule Geisenheim University. Schultz is involved in an experiment where small areas of the university's vineyard in the Rheingau which contain Riesling and Cabernet Sauvignon grapes have been surrounded by ventilators that pump extra carbon dioxide into the air to mimic the conditions these grapes are expected to face in the year 2050. "If you want look in the future, you need to mimic the future," Schultz says in a Quartz video piece. "You cannot do it in a greenhouse. We want to learn to adapt ahead of time to the conditions we're awaiting for us in 30 something years."

The experiment has only been running for a few years, but the differences are already reportedly apparent: bigger, juicier grapes that suck up more groundwater and face moths that are also reproducing faster. On the bright side, the increased carbon dioxide hasn't yet affected the taste of these wines substantially, but it's also noted that the experiment is ongoing.

Regardless, Schultz points out that he believes some of the changes are already here. "Grape growers and winemakers have to be much more flexible today," he told Quartz, "because the fluctuations between vintages, but also within a vintage, how suddenly the situations are changing, are much more accentuated than we used to have. If you're not flexible, you lost." 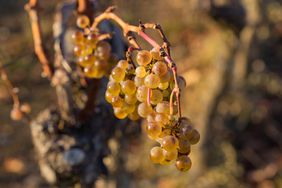