Wine Cab recently extended their service to include organic wineries in Bordeaux.

Brexit has created a renewed separation between England and France. For the average citizen, the issue isn't personal (any more so than before both countries were in the EU): Brits still want to visit France and drink their wine, and the French are still happy to take British pounds. Instead, everything is just a bit trickier than it used to be. Passports, customs: Call it a rift of bureaucracy.

But despite said rift, one French entrepreneur is keeping the bond between these channel-divided countries — by offering Bordeaux wine tours in classic English taxis.

Fed up with what he called the "soulless" experience he saw in homogeneous Bordeaux winery tours, Antoine Beucher — who has decades of events experience — launched Wine Cab in 2015, offering a slightly British spin on the popular tourist attraction, The Drinks Business reports.

Beucher has purchased three classic London cabs, described on the Wine Cab website as "the mythical model" of taxi known as the Fairway FX4 which was built by Carbodies from 1958 to 1997, all of which he acquired locally from individual owners in France, according to the site Complete France. He then took these cars "with a strong personality" and turned them into mini-tasting rooms.

If you've never been in the London cab, they have a large, open backseat area where travelers can face each other, kind of like a stubby limo. "Our spirit of conviviality is expressed first of all by the configuration of the vehicle with a wide interior space where passengers can face each other. But what distinguishes our London taxi and what makes it unique is the mini bar!" Wine Cab explains. "Your driver will lead the tastings, right next to him, there is a cooler with a fresh bottle of white wine, he will choose the best time and place to open the bottle for you!"

Wine Cab currently offers seven "Classic Tours," all of which shuttle around from two to four people for at least four hours with prices starting at about $150 per person. Options include straightforward trips around Saint-Emilion, to more themed adventures such as women winegrowers or "The Tasting Marathon" which features at least 15 different wine samples.

The service is also receiving some fresh interest as they've recently added an organic wine tour. which includes tastings at two organic certified wineries, an additional countryside tasting, and pickup and drop off from your hotel, as well as some other goodies such as a book with polaroids of your experience.

Custom tours are also available — because isn't that the point of a cab? You're supposed to tell them where you want to go! For more details, go to wine-cab.com. 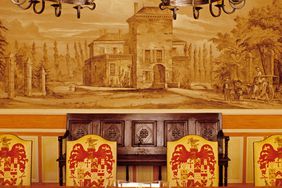