Wind may be a sustainable energy source, but the machinery used to produce it could stand to be more reusable.

Unless you're an attendee — or even if you are an attendee — you probably won't guess the answer. But according to one Michigan State University professor, they're all products that could eventually be made from sustainable wind turbine blades.

But before we get to the gummy bears, let's back up for a second. Wind turbines are used to produce clean, emission-free energy, but they do have one significant drawback. Although Bloomberg reports that "about 85 [percent] of turbine components" can be recycled or reused, their massive fiberglass blades often can't be.

Because the blades' lifespans can be shorter than the rotors, generators, and other pieces, they often have to be replaced first — and when the blades are removed, it can be hard to find a place to put them. (Around 8,000 blades will be removed this year in the United States, and Bloomberg notes that "only a handful" of landfills can accept them.)

That's where John Dorgan, Ph.D, a Michigan State professor of Chemical Engineering and Materials Science comes in. Dorgan and his colleagues have developed a new material that combines glass fibers with both synthetic polymers and polymers derived from plant materials.

The resulting thermoplastic resin is strong enough for use in wind turbine blades but, unlike the existing fiberglass versions, it can also be dissolved and recast to make another set of blades; combined with other materials to make a wide-range of consumer products like kitchen countertops, automobile taillights, or even diapers; or even purified through a distillation process to make food-grade potassium lactate.

"This is something that you would find in Gatorade sports drinks or in various types of candies," Dorgan said on Tuesday. "So we went that extra step and took the recovered material that we made and included it as an ingredient in some candies. We made gummy bears from that."

That's right: yesterday's wind turbine blades could eventually become tomorrow's gummy bears. "A carbon atom derived from a plant, like corn or grass, is no different from a carbon atom that came from a fossil fuel," Dorgan explained in a statement. "It's all part of the global carbon cycle, and we've shown that we can go from biomass in the field to durable plastic materials and back to foodstuffs." (Before you ask, yes, he's eaten those gummy bears.)

Although this is promising work, Dorgan said that there isn't currently enough of this new bioplastic to even make a full-sized set of turbine blades. So guess that means there's not enough to satisfy our sweet tooth yet either. 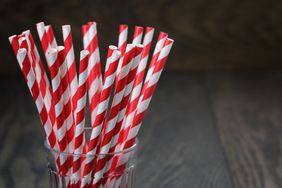