White Wine Emoji Fails to Get Approval from Unicode (Again)

The emoji oversight group says it will "continue to consider" it.

A white wine emoji is simply not meant to be — at least for the time being. Despite submitting a 19-page proposal to the Unicode Technical Committee (UTC) — the international team that handles these very important emoji matters — winemaker Kendall-Jackson, which has championed the campaign, was recently informed of the UTC's intention to "continue to consider [a] 'white wine' emoji for future addition," as stated in the minutes of their July meeting.

Interestingly enough, the reason the UTC provided for holding off on the emoji — which has generated plenty of support and, frankly, seems inherently logical — is that the concept has been deemed more technical than it seems. "The debate actually centers around color, not wine," Maggie Curry, director of marketing for Kendall-Jackson, explained. "Since a red wine emoji already exists, the white wine emoji is seen as a color variation and adding color variation to an emoji is proving more complex because the Unicode standard is not fully defined."

Unicode has dealt with this issue before: In 2015, the group added skin tone modifiers to allow human emojis to be more diverse. But in theory, allowing for the modification of other emojis could be trickier: Yes, wine might benefit from a red or white option, but that isn't as helpful with frogs or trees — and then suddenly the color of every emoji could be brought into question. This argument conveniently ignores the fact that some emojis — hearts, for example — already come in multiple colors. Would simply adding a single white wine emoji destroy the entire emoji system as we know it? Apparently so.

To be fair to the UTC, the fact that the wine emoji is red to begin with isn't their fault. All Unicode really dictates is that the emoji "U+1F377" is a wine glass. Each individual platform chooses what that looks like. According to the site Emojipedia, currently, every major platform fills the glass with red wine — but as they point out, up until 2016, Android had the glass filled with a cognac-like orange liquid instead. In some ways, it might be easier if Kendall-Jackson started petitioning major brands like Apple and Google to switch the color of their emojis.

That said, Kendall-Jackson isn't giving up on the UTC. "Continue to consider" means exactly that, and the California-based brand will continue to be in the UTC's ear. "The white wine emoji effort has garnered enthusiasm from around the globe, and we continue to refine our proposal to support the white wine emoji," Curry added. "What started as a fun idea has now turned into a complex effort for Kendall-Jackson, the wine community, and wine fans around the globe." I "U+1F442" emoji that! 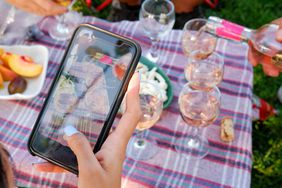