Nothing but respect for OUR royal couple.

As the world fawns over Prince Harry and Meghan Markle as they make preparations for the royal wedding, a different royal wedding took place on our very soil, with minimal fanfare, shielded from the prying eyes of the press and our grandmothers. On Sunday, March 11, Adam Mandel and Whitney Wicker joined hands in the Las Vegas White Castle, enveloped in refracted neon lights and thick onion-ring air. Here, they committed to each other, forever, the dings of slot machines acting as wedding bells.

The two newlyweds are not the first people to get married at the chain—there have been over 75 White Castle weddings, a spokesperson estimates—though they are the first to wed at the chain's Las Vegas location, as winners of a sweepstakes giving away a "royal wedding."

"White Castle has been marrying couples for at least ten years," said Jennifer Zuehlke, a brand manager who conceptualized the contest. "People are so attached to the brand; you grow up and see an opportunity to get married at White Castle, you just want to do it."

As it turns out, thousands of couples just wanted to do it, submitting essay applications (waxing poetic on their love of White Castle) in hopes of winning the ridiculous grand prize: an all-expenses-paid wedding at the Las Vegas Strip White Castle, with transportation and lodging included for the couple and six guests. Total, twenty-five friends and family members flew out for Mandel and Wicker's White Castle wedding, which was executed by a veteran Las Vegas wedding planner and catered by White Castle, in a dining room space just feet away from the Harrah's casino and a Britney Spears slot machine (this writer's favorite). The competition also covered the rehearsal dinner, reception, cake, flowers, décor, music and a professional photographer.

"I grew up going to White Castle all the time," said the groom, who's from Queens, N.Y. "I used to be in a bowling league, and there was a White Castle right next to the bowling alley, and every morning, I ate it first thing."

After he proposed to his now-wife in July 2017, she secretly submitted them into the contest, knowing how formative those sliders and chicken rings were for Adam. (The couple lives in Dallas, where there are no White Castles.) When they won, he was shocked and overjoyed.

"My favorite thing about all of this is that the food at the reception is White Castle," he said. "I didn't have to make a thousand choices. It's White Castle. I'm good." Adam would have been thrilled even if they won second place, which was a food truck rolling up to their wedding.

"Either way, White Castle was going to be a part of our wedding," Whitney said, with total confidence.

The day of the wedding, the Strip location of the White Castle transformed, not so unlike how Windsor Castle will transform for Meghan and Harry: white tablecloths (here, topped with sliders and mozz sticks), floral arrangements (here, composed of orange and white blooms with slider containers woven in), an extravagant cake (here, shaped like a giant slider.) For their honeymoon, White Castle is sending them to Belgium, a nod to their chicken-and-Belgian-waffle menu item. The reception had a DIY waffle bar and a burger-themed photo booth, where my beautiful date and I racked up some good options for the 'gram.

"As long as our closest friends and family could come, it doesn't matter where it is," Wicker said of the wedding. Mandel added, "I never wanted a traditional wedding. I always said, 'If we do get married, it's going to be crazy.'"

After making their relationship White Castle official, the couple stepped onto the make-shift dance floor for their first dance; they'd chosen *NSYNC's "This I Promise You." As the couple swayed before the giant slider wedding cake, wanderers on the Strip peaked through the blocked-off glass doors to catch glimpses of the chaotic magic. Almost every eye in the establishment was wet and at least a little red; Mandel and Wicker's parents, who flew out for the occasion and embraced the fast-food theme, beamed with pride as the two fed each other slider cake.

"My parents are crazy, so this is great—it heightens their crazy," Mendel said. "It gives them an excuse to be crazy."

Indeed, every guest had an excuse to be crazy, liberated from the burden of over-scheduled, Pinterest-perfect weddings with strict dress codes and decorum and non-mozzarella-stick hors d'oeuvres that you really just want to be mozzarella sticks. 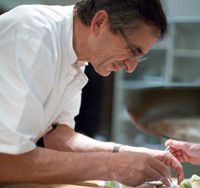