The Big Papi-approved rye is the first in a new Legends Series.

Despite a three-month lockout, Major League Baseball returns next week — and if you're looking for a spirit to toast to the fact that the season is actually happening, WhistlePig is launching a unique product that's likely to intrigue both whiskey fans and baseball fans alike: "the world's first toasted baseball bat-finished whiskey."

We've seen beer aged on baseball bats in the past, but WhistlePig says this new whiskey is the first of its kind. And not only that, it's been created in partnership with recent Hall of Fame inductee David Ortiz using wood from his signature bats.

The resulting WhistlePig PiggyBack Legends Series: Big Papi Barrel is billed as the first of three iterations of a new single barrel Legends Series that's being released in partnership with Barstool Sports. This Big Papi edition is 100 percent rye whiskey aged for six years in American oak before being finished for six weeks in barrels containing Ortiz's toasted DO34 maple wood bats, then bottled at 96.56 proof.

"If you ask anyone at the distillery, they'll tell you my signature quote is 'I'll put anything in a barrel once.' This experiment was particularly fun in that it brings together two of my favorite things — breaking new ground for rye whiskey and sports," WhistlePig Blender Meghan Ireland explained. "It was incredible to collaborate with David Ortiz, whose toasted maple bats add layers of spice and caramelized notes to the bold, 100 percent rye character of WhistlePig PiggyBack. I think fans of the game — regardless of team — will find a home run in the Big Papi Barrel."

WhistlePig says that less than 100 barrels were produced for this bottling. The bats are first "convection toasted in order to get the perfect toasted consistency, and then go through an extra fire toast to increase the caramelized vanilla flavors that imparts deep flavors into the whiskey." The final tipple is said to offer a nose of fresh cinnamon with notes of caramel sweetness, followed by powerfully spicy flavors on the palate with a balance of dark chocolate and maple syrup, then a lengthy finish full of vanilla and caramel notes from the toasted bats.

Bottles of Big Papi Barrel are available for pre-order starting today shop.whistlepigwhiskey.com for $49.99 each. Additionally, WhistlePig says a "limited quantity" of these 750-milliliter bottles that have been signed by David Ortiz (a.k.a. #34) will be available for $340 with proceeds benefiting the David Ortiz Boston Heart Classic, which raises money for children in need of heart surgery.

"I'm thrilled to go to bat for WhistlePig Whiskey by kicking off the first limited-edition collection in the new Legends Series," David Ortiz said in the announcement. "This first-of-its-kind whiskey gives fans the opportunity to celebrate America's pastime over a drink that connects them further to the sport."

The remaining two iterations of the "Legends Series" — which will celebrate other living sports legends (not necessarily just from baseball) — are slated to launch later this year. 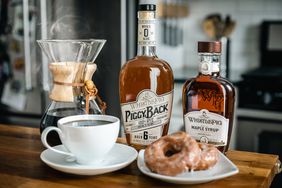