Pringles are pretty weird. They are the favorite snack of a shirtless Brad Pitt in the middle of a fever dream. They are both a chip and crisp (we will get to this important distinction in a moment). Their mascot, Julius Pringle, has a mustache but no mouth with which to eat the product he pitches. There have been over 100 flavors of Pringles, including grilled shrimp and pumpkin pie spice. Oh, and the inventor of the Pringle can is buried in one.

Here are five stories behind the odd history of this "hyperbolic paraboloid"-shaped snack food:

Are Pringles potato chips? While this question may seem to have an obvious answer, it ended up costing Procter & Gamble (the company that once owned Pringles, but since has sold it to Diamond Foods) more than $150 million. In 1975, the FDA declared that the makers of Pringles could not officially call them "potato chips" because their product was made from dehydrated potatoes, not thin slices of fried potatoes. However, the FDA gave Procter & Gamble a sort of half victory by allowing the company to refer to Pringles as "potato chips made from dried potatoes" as long as the lettering on the label was "not less than one‐half the size of the largest type." However, to do away with confusion, Pringles simply declared itself to be potato "crisps" and has since fully embraced this distinction.

But in 2009, a British court declared that Pringles were, in fact, "potato chips." This ruling meant that the snack food was subject to certain British sales taxes that applied to potato chips, but not other snacks. Despite arguments from Procter & Gamble regarding Pringles' precise "potatoness," the judge in the case declared that there was "more than enough potato content for it to be a reasonable view that it is made from potato." Due to this ruling, Procter & Gamble owed nearly $160 million in back taxes and $31 million every year going forward.

Invented to be a Potato Chip Utopia

Constantly hearing from complaining customers about broken and stale potato chips, Procter & Gamble hired food chemists and organic engineers to create what they hoped would be the "perfect potato chip."

By their nature, potato chips are delicate. As thin strips of fried potato, they can easily be crushed and, once exposed to air, can go stale quickly. The company's mission - under the leadership of Vic Mills, the guy who invented the disposable diaper and food chemist Fredric Baur - was to rectify these two problems. Starting with dehydrated potatoes, they mixed in water, sugar, salt and oil (today, that slurry consists of rice, corn and wheat too) to turn it into a paste. Using a cookie-cutter type of device, each chip was stamped out in the exact same size, shape and weight. The thought was that if the shape was uniform, they could be easily stacked on top of each other and stored in such a manner that prevented breakage. Hence, the iconic "saddle" or, more technically, hyperbolic paraboloid shape. Besides helping with shape, Baur was the one who specifically developed the now-famous tennis-ball, vacuum-sealed can to house these unusual-looking chips and keep them fresh.

After seven long years of development, Pringles premiered in Evansville, Indiana in 1968. They were not a hit right away - in fact, they were considered a flop until the 1980s - but soon Pringles became a household brand. Baur was so proud of what he had developed that he, quite literally, took the Pringles can to his grave.

Buried in a Can

Baur's last wishes to be buried in a Pringles can wasn't exactly a surprise to his kids. "When my dad first raised the burial idea in the 1980s, I chuckled about it," his son Larry told TIME in 2008. So, when Baur died in May 2008, the Baur family knew what they had to do: Go to Walgreen's and get a can of Pringles. "My siblings and I briefly debated what flavor to use," his son continued to TIME, "but I said, 'Look, we need to use the original.'"

Somewhere in Arlington Memorial Gardens in Cincinnati, there's a grave that contains a Pringles can holding the cremated ashes of the man who invented it.

From Frying to Sci-Fi

Baur wasn't the only one who helped with developing Pringles that had a quirky personality. After a stint as a combat engineer during the Korean War, Gene Wolfe studied engineering at the University of Houston with the help of the GI Bill. Then, he got a job with Procter & Gamble. While there, he was put on the team to help develop Pringles. Specifically, his job was to devise "a means of frying molded potato shingles before they dropped onto a conveyor belt." To this day, Pringles makers still use that process.

But that isn't what Wolfe is most famous for. In 1972, while working as an editor for a technical engineer publication, he published his first successful science-fiction novel. Eight years later, the first volume of Wolfe's magnum opus "The Book of the New Sun" debuted. Compared to Ulysses by the New Yorker, it is considered one of the greatest sci-fi volumes of all-time.

What is a "Pringle?"

While company officials have never confirmed exactly how the name "Pringle" came to be, theories and rumors have proliferated over the years. There's the legend that the company wanted a name that started with "P" (for potato), so they leafed through the local phone book and found "Pringle" Drive in nearby Finneytown, Ohio.

However, there's another theory too - one that is a bit less random. In 1937, an inventor from Amsterdam, New York named Mark Pringle filed for a patent for an apparatus that better standardized the processing and slicing of potatoes. As described in the patent, the point of the invention was to create a "food product in wafer form of such uniformity in size, weight and shape that can be economically packaged in a very compact manner so as to exclude any appreciable quantity of air," which sounds very close to what Procter & Gamble would do later. While Pringle's invention didn't gain any traction and he never describes what those "wafer" are made with besides potato, it is very possible that Pringles were named after him as a sort of homage. In fact, a 1969 patent from Procter & Gamble employee Alexander Liepa for an "apparatus for preparing chip-type products" cites Pringle for his research and work. 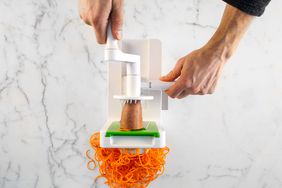