Here's how to score a tube of limited-edition Tropicana Toothpaste.

Despite their now-commonplace nature, both toothpaste and orange juice are relatively modern concepts. Colgate says their tubed toothpaste was first released in the 1890s, and the current group of modern ingredients didn't arrive until after 1945. Meanwhile, The Baltimore Sun explains that until the 1920s, most Americans didn't drink much orange juice; it wasn't until the 1930s when orange juice became the U.S.'s second most popular breakfast drink behind coffee.

So despite emerging around the same era, why don't toothpaste and OJ get along? An ingredient called sodium lauryl sulfate (or "SLS") is largely to blame. The cleaning agent and surfactant causes orange juice to taste gross after brushing your teeth. Admittedly, SLS isn't found in all toothpastes, but it's found in most toothpastes, meaning your average OJ lover knows the pain of not being able to fully enjoy their morning orange juice after a brush.

But finally, the experts at Tropicana have come up with a surefire way for juice lovers to indulge in orange juice after brushing their teeth without off-flavors: Tropicana Toothpaste.

"We worked closely with research and development partner Dynamic Blending Specialists to bring this toothpaste to life, from the initial concept to product development, production, and finally reality," a Tropicana spokesperson explained via email. "Tropicana Toothpaste is different from other toothpaste because it was specifically designed to protect the delicious taste of orange juice. It does not include sodium lauryl sulfate (SLS) as an ingredient, a cleaning agent prevalent in toothpaste that contributes to the bitter aftertaste from brushing your teeth with toothpaste and then drinking OJ."

The new limited-edition toothpaste, which arrives in a clearly-branded Tropicana Toothpaste tube, will be released on November 1 — National Brush Day. That said, the toothpaste won't actually be available to buy. Instead, Tropicana writes that "consumers are encouraged to comment on Tropicana's Instagram page and may just receive a fresh surprise."

The toothpaste certainly could prove popular. Tropicana said a survey they commissioned found that 78 percent of people agree that brushing your teeth can ruin the taste of orange juice in the morning.

Of course, people could also brush their teeth after drinking orange juice but it's nice to know we have the option. 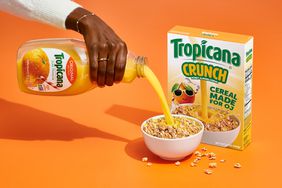 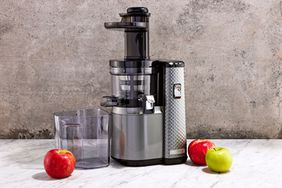