Tropicana will be giving away boxes of the limited-run, granola-based cereal for free.

Pouring milk onto your cereal is the classic (and, for many people, only) viable combination. Sure, you can crack jokes about dumping in beer or even try water in an act of complete desperation, but, for whatever highly-scientific reason, milk and cereal are the ultimate pairing.

What about orange juice? It's already on the table as part of a mythical "complete breakfast," so why isn't it plausible to pour OJ over your cereal? (And didn't we all try this as kids at least once?)

Even the orange juice specialists at Tropicana admit that OJ might not be the ideal choice for mixing with cereal, but in honor of National Orange Juice Day on May 4 the brand is planning to rectify this situation: They're releasing a cereal specifically intended to mix with orange juice instead of milk.

Tropicana Crunch is touted as "the first-ever breakfast cereal created to pair with Tropicana Pure Premium so you can sip your sunshine and eat it, too." The unusual cereal that is "made for OJ" will only be available through TropicanaCrunch.com. The juice brand will be giving boxes away for free while supplies last starting on May 4.

But what is Tropicana Crunch? The box describes it as a "honey almond cereal," and the website explains that it contains honey almond clusters. A Tropicana spokesperson further explained to us that, after testing multiple flavors and textures, the company opted for a granola-based cereal because it can withstand the acidity in OJ better than things like flakes, which would go soggy more quickly. And the honey almond flavor was chosen to balance against the orange juice's tartness. Additionally, the box advertises that it comes with a "paper sipping straw inside," seeming to imply that taste-testers should be willing to slurp up any of the remaining liquid in the bowl.

Still, on the Tropicana Crunch website, the brand does hedge their bets. The combo is referred to as "an unforgettable breakfast experience" (so is being struck by lightning) and later, the site says, "whether you hate it or love it, you won't know until you try it." At the very least, I can't imagine it being worse than pouring OJ on any other cereal.

Meanwhile, this orange juice pairing cereal is the second time in the past year Tropicana has made a bold attempt to tackle some of orange juice's perceived shortcomings. Last year, the brand released Tropicana Toothpaste, a limited-run giveaway of a toothpaste especially designed to not make your orange juice taste bad after brushing your teeth. 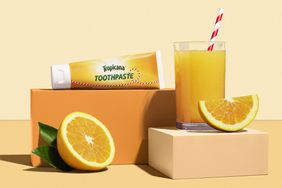