These Trix are for grown-up kids.

You'd think breakfast cereal would sort of sell itself at this point, but reminisce back to watching TV commercials during your childhood and you'll realize there is an all-out war to get inside your cereal bowl. However, the stiff competition didn't necessarily mean cereal brands had to reinvent the wheel all the time: Simply changing the shape or adding a new marshmallow is all it takes to get kids clamoring to get their hands on a box. If you grew up in the 1990s, of the many cereal innovations that happened at that time (Oreo O's cereal, Rice Krispies Treats cereal, Waffle Crisp cereal, we could go on…) one of the major game changers was when General Mills decided to upgrade the spherical shape of its colorful classic Trix into new fruity forms.

Starting this month, fans of the variety of Trix shapes introduced nearly three decades ago will be able to relive their youth with the (re)release of Classic Trix. To revue, those updated shapes include raspberry and wildberry clusters, grape bunches, orange and lemon wedges, and watermelon slices. The shapes lasted from 1991 to 2007.

Trix first hit the cereal aisle in 1954. At the time, they were simply crunchy little corn puff balls that came in three colors: Orangey Orange, Lemony Yellow, and Raspberry Red. Over the years, Grapity Purple, Lime Green, Berry Blue (Wilberry Blue, for a time), and Watermelon were added and removed, eventually ending up with red, yellow, orange, and purple when General Mills attempted to swap out artificial colors from its cereals in 2015. The cereal went back up to six colors when the company reneged on that change a couple years later. The new Classic Trix is a return to that original formula.

"Trix cereal is beloved by our fans, and we heard loud and clear that they wanted to see the iconic shapes back in their bowls," Scott Baldwin, director of marketing for General Mills cereal, said in a statement. "When Trix launched in 1954, it was the first fruit-flavored cereal that was colorful and fun. We're excited to continue that legacy, bringing an extra dose of joy to breakfast."

According to General Mills, the company has received over 20,000 requests to bring back the former shapes in the past 18 months alone. And with '90s nostalgia in full swing here in the 2010s—we're talking pop-up Saved By the Bell diners, Nickelodeon Guts-inspired beer, and the return of Crystal Pepsi—it's no wonder Trix would listen to its older fanbase who have been requesting a return of the discontinued redesign on social media. The best part is, while many of these old-school reboots are only around for a limited time, Classic Trix is back for good (at least, for the foreseeable future).

The new/old Classic Trix cereal with fruity shapes hits stores this October and will be available in three box sizes—from $3.52 to $4.59—and one larger 35-ounce bag size for $5.98. 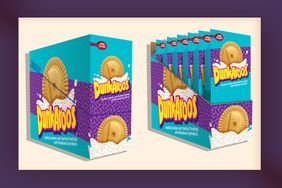 Dunkaroos Are Officially Coming Back