The chefs leave Los Angeles for Italy and a Tuscan food festival challenge.

After an epic all-star challenge at Michael's Santa Monica, the chefs are headed to Italy for the first round of the finale. We find Melissa, Gregory, Bryan, Kevin, and Stephanie getting ready for their long journey from Los Angeles to Italy, an early morning flight that requires them to be awake at 5:45 a.m. Stephanie is feeling the pressure since she's the only chef left who didn't make it to the finale of her season of Top Chef. "But I've proven myself a thousand times over," she says. Can she pull off a win in Italy? Kevin is thinking about his road to the finals and how his health scare taught him to "fight each day like it's your last." "It's my responsibility to be the next Top Chef," he says.

They land in Rome and head to the Renaissance Tuscany Il Ciocco Resort & Spa. They barely have time to take in the breathtaking scenery before they find a note from Padma Lakshmi telling them to get some rest before meeting her tomorrow afternoon. They settle in for the night but Gregory is having a hard time sleeping since he threw his back out over the course of the competition. He's hoping it doesn't bother him during the finals.

The next day, the chefs head to a gorgeous piazza in Lucca where they're greeted by Padma and chef Filippo Saporito of the Michelin-starred La Leggenda dei Frati. It's time for their first Quickfire challenge in Italy!

"Who's ready for happy hour," Padma asks the cheftestants. The chefs will be celebrating aperitivo hour—a pre-dinner tradition for Italians that's all about snacks and a light tipple like a beer or an Aperol spritz— by making an aperitivo spread inspired by regions of Italy for thirty locals to enjoy with Peroni beer. No pressure. The winner will get $10,000 from Peroni.

With that, the chefs run to their stations and get cooking. Gregory gets the "Islands" region which has lots of seafood. He's steaming clams with a saffron broth. Melissa gets "Central Italy" and finds mussels on her station which she's going to cook and pickle like a seafood salad, which is very Italian. Stephanie has "Northwestern Italy" and is really going for it by making a venison taleggio en carozza, or deer meat encased in pastry. It's an old-school snack that could be amazing if she can pull it off in forty-five minutes. Kevin has "Northeastern Italy" and is making polenta with prosciutto and radicchio agrodolce. Bryan is cooking with the "Southern Italy" basket and is making lamb with gremolata.

Gregory tastes his clams and realizes that they're very sandy so he pivots to cuttlefish in order to make something in time. Bryan can't figure out how to serve his lamb to make it more "exciting" and he's running out of time so he cuts the lamb into a tartare which is not typical for the region he's representing. Stephanie made exactly thirty sandwiches meaning she doesn't have a completed sandwich to taste as time runs out.

Here's what our cheftestants served:

After serving thirty hungry Italians, Padma and Filippo share with the chefs which dishes are on the top and the bottom. On the bottom are Bryan's lamb tartare for being too strongly flavored and Stephanie's venison because the execution was off. On top are Melissa's simple, citrusy steamed mussels, Kevin's polenta, and Gregory's cuttlefish. The winner? Kevin's polenta! He's got $10,000 from Peroni.

The chefs say goodbye to Filippo and hello to Tom Colicchio who is looking like a spy in all black with a black brimmed hat.

The chefs have to "dig deep" to win their first challenge in Italy, Padma says before telling them they're going white truffle hunting! They've arrived in Italy during peak white truffle season so they'll join some truffle experts on a foraging expedition. "This is definitely a chef's dream to go truffle hunting in Tuscany," Stephanie says. The chefs will have to use white truffles to make a dish for a Tuscan food festival. They'll have three hours to prep and cook at L'Imbuto Restaurant before relocating to Palazzo Pfanner where they'll serve 100 festival-goers.

They are greeted by Luca Campinotti and Christiano Savini of Savini Truffles who will be showing them through the forest. With the help of two very cute doggies, they start finding white truffles buried deep in the Tuscan earth. Considering that truffles go for about $2,987 per kilo, they're precious cargo. "As a chef, it's my job to highlight that flavor," Melissa says thinking about what she's going to make for the challenge.

That evening, the chefs have 45 minutes and 400 euros to shop for ingredients. Gregory is making wild boar and cocoa stew which sounds really interesting. He admits that he's worked with black truffles way more than white but he's confident he can pull it off. Melissa is bringing Asian flavors to Italian ingredients which is a smart idea since it's what got her to the finals. She's having flashbacks of her time on Top Chef Boston where she made it to the finale only to be the first person sent home.

The next morning the chefs are up bright and early, gathering their thoughts and getting ready for their cook time. Stephanie has decided to completely change her dish to pasta because that's one of her strong suits and would be a great way to pay homage to the fact that they're in Italy. It's risky but could pay off for her if she nails it.

In the L'Imbuto kitchen, the chefs get cooking. Melissa is making congee, a rice porridge which is a great accompaniment to truffles since it will let their flavor shine through. Bryan is making braised veal with truffled pureed potatoes and Kevin is making meatballs with cippolini onions and chestnut honey. Those are all really strong flavors that might clash with white truffles. As Kevin is making his meatballs he realizes that the packages of meat he bought are a mixture of pork, wild boar, and veal which have different consistencies and flavors. He's going to roll with it anyway and hope for the best. Stephanie is making a brown butter mezzaluna and Gregory is making wild boar and polenta with truffles folded in, a dish that Kevin suggests in his confessional would be hard to taste the truffle in. Stephanie tastes her radicchio component and it's super bitter so she tries to mask it with a ton of butter. She's still going to use it and hope the other components of her dish balance it out.

As the chefs pack up to head to the festival, Gregory is wincing from his back pain. "This is our first elimination challenge so I just have to tell my body to do what I need it to do," he says. Padma and Tom arrive with Gail Simmons, chef Cristiano Tomei, truffle expert Cristiano Savini, and some locals. It's time for the festival to begin!

Here are the final dishes and what the judges thought:

Kevin's plate is very rustic—a browned meatball next to big slices of white truffle. Gail asks why he chose to fry the meatball instead of braising it and he says there's plenty of fat elsewhere in the dish. The locals disagree saying the flavors are competing with the truffle for attention. Cristiano says the dish would have been better if he left off the meatball entirely.

Stephanie's delicate mezzaluna are beautiful and perfectly folded. The judges think she should have left out the radicchio altogether because, as Gail says, "the pasta was lovely." "This is one of the few times where you don't want balance, you want the truffle to shine through," Gail adds.

Gregory's dish looks like a hearty bowl of ragu over creamy polenta with plenty of truffles shaved on top, which he is adding to the bowl very generously. Padma translates that one of the guest judges is not sure Gregory knows how much the truffles cost because he's putting so much on each plate. Tom thinks the stew is great but the truffle didn't shine through. Cristiano agrees, saying truffle flavor "isn't there."

Melissa's dish, a bowl of brownish rice porridge, looks very homey but she's layered the flavor of truffles throughout and accented with iconic Italian ingredients like salami. Tom seems very pleased, saying the congee acted like risotto which is such an iconic pairing for highlighting truffles. Cristiano says he would remove the salami, but otherwise it's a really "intelligent" dish.

Bryan doesn't have his tweezers, but he's got an aerated can of potatoes so he's sticking to his avant-garde style even in Italy. "It has the right classic flavors… Bryan was coherent with Italian traditions," Cristiano says. Gail says she got the purest truffle flavor from Bryan's dish.

"White truffle is tricky, it's not just about making a dish and shaving truffles over it," Tom says. The judge's favorite dishes of the day were Bryan's stew and Melissa's congee. Gail says Bryan's potatoes were the perfect vehicle for truffle. Melissa gets praise for meeting the challenge while cooking food she knows. "You have the courage to do the necessary thing a chef must do, which is be themselves," Cristiano says before begging her to never cook salami again. The winner? Melissa! She and Bryan earn a spot in the next round of the finale.

That means Kevin, Stephanie, and Gregory are on the bottom. Tom says Gregory pulled his knack for making "deep, dark stews" out at the wrong time since this challenge was about highlighting truffles above all else. He also made the critical error of cooking white truffles which, Cristiano says, added to the dish being unsuccessful. Kevin's dish suffered the same fate. Gail says the polpette had so many flavors going on that it overwhelmed the truffle. Padma hails Stephanie's courageousness for making "beautiful" pasta for Italians but thinks she should have left the radicchio out to focus on truffles.

It's a tough call for the judges because all of the bottom chefs made the same error. In the end, it's Gregory; a shocking elimination because he's been a front runner in this competition all season.

There are now just four chefs in the running for Top Chef. Who will survive to the finale? Take a sneak peek at next week's episode below: 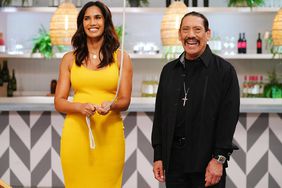 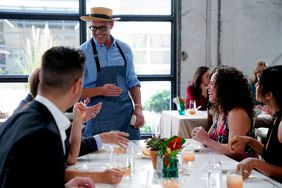 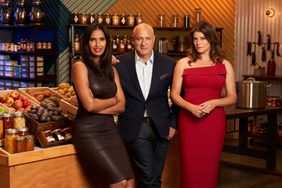