Five (or is it six?) chefs remain as the competition pays one last tribute to Kentucky.

There are just five chefs left to fight it out for the title of Top Chef. Can you believe it? The cheftestants are still in shock over Eddie's elimination because, as Kelsey puts it, "he made a great dish." True. The competition is only going to get more intense as the challenges go on because everyone is so talented. The chefs are realizing that the judges will have to send home chefs even when their dishes are really good and they're all a little scared.

The morning after the challenge the chefs get a wake-up call from Tom Colicchio. Literally. Tom comes into the house and wakes the chefs up and tells them to meet him in the garden for their last Quickfire in Kentucky.

In the garden they meet guest judge Ouita Michel, restaurateur, chef, and owner of Holly Hill Inn in Midway, Kentucky, and get a big surprise: Last Chance Kitchen never stopped and another chef will be joining them for this Quickfire. And the chef that's coming back is (drumroll please) Michelle!

The chefs seem really excited to see her which is a bit surprising since they have to now beat her to get the title.

In a twist that everyone saw coming, the chefs will have 45 minutes to harvest vegetables from their garden that they planted four weeks ago and make a vegetable-forward dish in the kitchen. Ouita gives the chefs a word of advice: "let the vegetables shine and be the star of the plate." And with that, they're off!

The chefs get their veggies and hit the kitchen to start cooking. Sara is (wisely) making a dish that features a ton of summer squash, byaldi or ratatouille. In a nod to her grandmother, Kelsey is making a southern classic, fried green tomatoes with an herbed ricotta sauce. Eric notices that everyone is cooking their vegetables so he goes the raw route with a green tomato gazpacho with coconut milk.

Toward the end of cooking, things start to go off the rails for a few of the cheftestants. Kelsey reaches for a scalding hot pan and gets scorched on her palm. Michelle only gets fifty percent of the vegetables she cooked onto the plate. Time's up and the chefs must present their dishes.

Outside, Tom and Ouita taste through the finished plates. On the bottom are Eric's soup for not being vegetable-forward enough, Kelsey because of her lackluster ricotta, and Michelle's plate for not having enough vegetables. On top are Adrienne, Sara, and Justin for all having a ton of vegetables and acidity. The winner? Ouita picks Justin meaning he wins $10,000 but not, crucially, immunity.

Tom also shares that the chefs will be heading to Macau for the finals and they all freak out which is totally understandable. China is on nearly every chef's list of places to visit and eat, so they're all excited to go. But first, they'll have to make it through an Elimination Challenge.

The chefs head to Keeneland Race Track, the largest thoroughbred auction house in the world, and see Padma Laksmi on stage with Ouita. For the final Elimination Challenge in Kentucky, the chefs will have to make a dish honoring their mentors and, as a surprise, their mentors will be tasting their dishes. No pressure. They will be judged by Tom, Padma, Ouita, their mentors, and Gail Simmons. It's all smiles and good memories until Padma says, "are you ready for the fun part?" Each chef will have to bid for specialty ingredients like foie gras and caviar for their dishes. But they'll only have $500 total for their bids and additional ingredients they may need from Whole Foods Market.

The bidding starts and the chefs look like fish out of water. They have a booklet of the items that are coming up for auction like rabbit, Iberico ham, and mushrooms but they don't know if anyone else will want that same thing so they're hesitant. As the vegetables come out the bidding gets intense. Adrienne and Sara go head to head for in-season asparagus which is very tasty but not worth the $100 that Adrienne eventually spends on it. "What in the actual world is going on," asks Kelsey. After the auction is over, the chefs head to Whole Foods and back to the house to rest before their three hour cook time tomorrow. Here's how things shook out:

Michelle seems pretty happy with her auction items and is excited to make a dish that is both "feminine" and respectful to the farmers that grew the produce. During cooking Michelle leaves her salmon in a convection oven too long and is worried that it might be overcooked. It doesn't seem to hurt her at all as the judges heap praise onto her dish. "The dish is feminine, balanced and a gorgeous combination," Gail says. "If there was anything that took away from it, it was that vinaigrette," Graham says.

Dish: Gumbo with crab, seafood sauce and garnished with caviar

Kelsey is making her mom's gumbo, the first staff meal she made at Cafe Boulud while working under Gavin Kaysen. "This might be one of the best gumbo sauces that I've ever made," she says as she plates her dish. Everyone seems to like her dish a lot but Chris Coombs (Adrienne's mentor) finds shells in his crab meat which is a bummer.

Adrienne decides to make a duck dish because her mentor Chris always has duck on his menu. During plating, she's scrambling for time because the dish has so many components and eventually is "just throwing" her elements onto her plate. Chris, who was extolling Adrienne's plating skills moments before, calls her out at the table and says he "wished the plate was wiped" of the splashes of sauce. Ouch. Ouita says the duck is cooked beautifully but Tom wishes that the spice level on the duck was higher.

Justin is making a hot and cold duo of yellowtail with kimchi because that's one of his mentor's favorite foods. He manages to get his dish cooked and plated quickly but has to keep them under a heat lamp to stay warm which is not ideal. "This could end up going wrong," he says. "There's good flavor overall in Justin's dish but the yellowtail on the raw side is just really bland," Tom says. The cooked fish is also inconsistent with Brian Voltaggio getting a perfect piece and Gavin getting a piece that was overcooked.

Eric gets Wagyu tenderloin in the auction, meaning he's probably going to serve a steak dish of some kind and is going to add some of West African flavors. At the end of cooking, he's happy with how everything eats but not with how the plate looks. Padma, who has had Brian's food on the show, says that this tastes "nothing like Brian's food" and asks about the inspiration for the dish. Eric says that he was inspired by how Brian "deconstructs and reconstructs food." Tom likes it but says that he's missing a "green" element and feels like the dish wasn't fully realized.

Sara got a whole leg of Iberico ham for $80 during the auction — quite a luxury since a leg of Iberico goes for up to $1,000 — so she's using the ham to make a broth. It's going to be pretty hard to make a dish that doesn't taste really good. David says the broth "is very deep and rich but still very light" and Tom says the fish is "perfectly cooked." Ouita joins the praise train by adding that she's so happy to see a fellow Kentuckian return to open a business in small-town Kentucky. Aww.

Gail says that she feels like she knows a lot about each of the chefs because of the dishes that they made for their mentors which is really sweet. Ouita gets to announce the challenge winner and (no surprises here) it's Sara!

She's really hitting a stride these past few weeks. Ouita gets teary as she tells Sara how proud she was to see her serving soup peas. "I know that I have done my state proud," Sara says.

The judges don't separate the other chefs out into top and bottom, and instead gives each of them a critique. Gail asks Justin if he got everything done that he wanted to and he says yes which shocks her. Adrienne admits that she was rushed while she was plating and feels like that reflected poorly on her mentor. Kelsey gets feedback about the sauce on her dish. Graham compliments Michelle on her salmon dish because it used every bit of the salmon and conveyed a philosophy. Eric gets praise for using sorghum leaves in a really interesting way and for cooking his grains perfectly.

"I wish we could bring them all to Macau," Padma says. But there's only room for five chefs, so who goes home? In the end, it's Justin, the lovable Midwest chef who's asked to pack his knives and go. "I'm a realist and I know that only one person is going to eventually make it but it still sucks," he says. I'm going to miss him and his jokes.

That's it for Kentucky! The next time we see the chefs they'll be in Macau for the start of finals and ultimately the crowning of the next Top Chef! 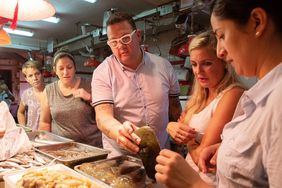