I joined the many viewers who let out a collective gasp of shock at Chef Eric Adjepong’s elimination during the Season 16 finale of Top Chef last night, a moment that caused some fans to take to Twitter to express their disappointment.

Throughout the season, Chef Adjepong won over viewers with his charisma and passion — and his unapologetic use of both bold and nuanced flavors and ingredients of the African Diaspora. As the first person to put West African flavors on the Top Chef map, I was rooting for him, as there’s never been a contestant like him in the show’s thirteen-year history. And he did not disappoint — Chef Adjepong shined time and time again, securing wins during the show, with dishes like fufu in Congolese red sauce.

For the finale, I waited in eager anticipation of his four-course meal telling the story of the transatlantic slave trade — a reminder of West Africa’s contribution to Southern food, the very food he was competing against from two fellow finalists who hail from Kentucky and Alabama. Chef Adjepong’s take on West African dishes showed that so-called “ethnic foods” like Ghanaian cuisine, often on the list of ill-informed “Cheap Eats” columns, not only deserved a seat at the table, but were the very foundation that the table rests on. Seeing Chef Adjepong represent, stay true to, and celebrate his Ghanaian roots was a breath of fresh air, proof that the flavors he grew up with deserved to be showcased on the global culinary stage.

While we saw a range of cultures and flavors this season, it was also a reminder of the need for equity and representation at the judges’ table. Take, for example, some of the confusion (and misclassification) when Chef Adjepong made fufu, a staple in many West African countries. Or criticizing the “gritty texture” of Adjepong’s egusi stew, despite ground egusi seeds’ role as an integral part of West African cuisine. While the judges generally loved Chef Adjepong’s dishes, some lack of awareness of West African cuisine was evident throughout the show. Africa is the second largest continent on Earth, home to myriad flavors and textures unfamiliar to many Western palates — and learning it all is no small feat. In hindsight, this season would have been the perfect opportunity to feature other guest judges of color — such as Chef Pierre Thiam — who would’ve been able to provide a more fluent understanding of West African food on the panel. While Adjepong’s third-place showing was admirable, his dishes and their reception were also a case study in the importance of diversity on both sides of the judges’ table — and that what makes a "good dish" can be as culturally subjective as it is personally.

While this season of Top Chef brought extraordinarily talented people from all backgrounds, the collective frustration online was a familiar one, and it’s understandable: we don’t see enough diverse stories represented fully and accurately on the small screen. Viewers want to see stories that are a far cry from the formulaic narratives; seasons five and six of Chef’s Table certainly moved in that direction, highlighting women and chefs of color to much acclaim. However, this doesn’t mean that we should all start congratulating ourselves — there is still more work to be done.

As Chef Adjepong leaves Top Chef, he says: “It’s taken 16 seasons to showcase food from Africa.” Let’s hope this was the first of many to come. 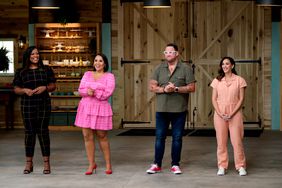