A novelist tours Oregon's edge, known for its beauty, its seafood and the lingering presence of the irrepressible James Beard

If a doctor gave me only a few months to live, I would go to Gearhart, Oregon, and stay with Gordon and Colleen Powell. They are the parents of my friend Paige Powell and only one of the reasons I am deeply envious of her. It isn't just that they are such kindly, attractive people--the sort that seem like perfect parents--but also that they live in what is possibly the loveliest spot I have ever seen.

Their house overlooks the Pacific Ocean, near a beach with clean, fine white sand that stretches for miles and that is always empty except for driftwood and furious waves. In the distance, off Tillamook Head, is a giant rock sticking out of the water--5, 10, 15 stories high?--that resembles an image from a classical Chinese brushstroke painting. In front of the Powells' house is an estuary, about a mile wide, which reveals itself in ever-changing patterns as rivulets shift their course in the sand and the water comes through a gap in the dunes. Sometimes you can see pelicans, eagles, otters, seals and beautifully dressed families digging for clams. For a time, a wild coyote pup emerged from the pale gray-green dune grasses to romp with Paige's dog.

The little town of Gearhart is filled with summer cottages and lots of good-looking blond people whose families have no doubt been in the area for generations. In fact, the most famous resident of Gearhart was blond (although for much of his life he was bald). He was James Beard, the eminent cooking teacher, writer and TV personality who popularized fine food in America in much the same way that his friend Julia Child did and who remained an ardent epicure throughout his life. (He died in 1985 at the age of 81.) Beard summered in Gearhart as a boy, and as an adult he returned regularly to teach.

Mary Hamblett, who's now 92, also summered in Gearhart as a child. "Before Mrs. Beard and James had their house, they would come and stay with us," she recalls. "James and I used to hunt on the golf course for those fat mushrooms that are pink underneath. Mrs. Beard and Mother were Englishwomen, so we only collected one kind of mushroom--I don't know the name--the same type they'd picked in England. And we'd walk over to Seaside for the nickel milk shakes. James had a little dog, a white poodle that went everywhere with us. At night we'd have bonfires and wienie roasts on the beach. James was always interested in food, even as a child. We'd pick blackberries and huckleberries and wild strawberries.

"When Mrs. Beard and James finally were able to get a place of their own, it was the smallest house in Gearhart--and Mrs. Beard and James were big. Very big. I never did understand how they could fit into that tiny house. There was only a woodstove and no fireplace, but they managed, and they always had friends and a houseful of visitors."

Like the Beards, Paige's parents are remarkable hosts. When I arrived for a visit last spring, Colleen brought me a crab cocktail that she'd made with the meat from huge local Dungeness crabs sold at Bornstein's Warrenton Deep Sea (45 Northeast Harbor Pl., Warrenton, OR; 503-861-3911), where fishermen bring their catch right up to the store by boat. You can buy a huge cooked Dungeness crab for about $10, fabulous smoked mussels and oysters by the pound, and tuna fish in cans--real tuna fish, which is a whole different deal from the tuna fish you find at the supermarket.

I sat on the porch eating my spicy crab and drinking a nice glass of wine and looking out onto the ocean and basically just breathing, because the air was so salty and fresh I almost could have swallowed all its positive and negative ions, they were so crisp and lively.

When I wasn't walking on the beach looking for perfect sand dollars, Paige chauffeured me around so I could eat. The first evening we drove to the Pacific Way Bakery & Cafe (601 Pacific Way, Gearhart, OR; 503-738-0245). The proprietors, John and Lisa Allen, live upstairs, and every day Lisa gets up at midnightto light the ovens and start baking. Even though the place has been open only 10 years, it seems as if it has been around forever. On the night we were there, a variety of locals were having dinner: white-haired ladies, a tattooed couple drinking beer and playing with their baby, a genuine bar pilot (who steers boats through dangerous straits, a task even computers can't do) and some of the young blond people. It is probably the happiest restaurant I have ever been to. Colleen had tandoori salmon, Gordon had halibut in a nut crust, and although I'm not normally a fish person, I suddenly understood that I could maybe be a fish person when the fish is so sweet and fresh. Paige, who is a strict vegan, got a vegetable plate, and I had a pizza made with real smoked salmon, chewy and delicious and quite different from the type of smoked salmon I eat in New York City, where I live.

In the morning, we got back in the car and drove across the mouth of the Columbia River into Washington State. You can't go a hundred yards there without passing a roadside stop with a sign announcing in bold letters "Espresso Served Here." It amused me that in this truly American landscape, with the rugged coast on one side of us and stands of fir trees on the other, there were signs not for java or joe but for this trendy Italian drink.

Farther up the coast we pulled over at Anna Lena's (103 Pacific Way, Long Beach, WA; 800-CRANBERRY), which is owned and run by Karen Snyder, the sister of Paige's brother-in-law. Karen, who has pink cheeks that make her look like a gorgeous cranberry, had gone to the bank some years back for a $5,000 loan; now her business brings in half a million a year. Her store is close to her cranberry bogs (some of which are planted with bushes that date back to 1918) and to her small factory, which produces cranberry conserve, cranberry ketchup, cranberry fudge and cran-berry mustard. The setup seemed so sane and civilized, like a Martha Stewart parallel universe.

On the drive back to Gearhart, we passed fish shacks advertising lobster tails for $1.99 a pound and junk stores and antiques shops and places to go deep-sea fishing. We saw roadside stands that sell wild mushrooms and greasy spoons that serve cioppino made with fresh geoducks, clams that are also flown to Japan and sold for a small fortune.

We made another stop at the Shallon Winery (1598 Duane St., Astoria, OR; 503-325-5978). The owner, Paul Van der Veldt, has been making wine (but not a profit or even a respectable living, he says) for 40-plus years. "I'm the only person who produces wine using whey," he told us. "They said it couldn't be done, but after years of experimentation I did it." He sells cranberry wine, blueberry wine, rhubarb wine, lemon-meringue-pie wine and chocolate-orange wine. "Now some people want to know what you can do with my chocolate-orange wine," he remarked. "I tell them you can do whatever you want with it. You can pour it over fine vanilla ice cream, pancakes or waffles; you can serve it like liqueur; you can drink it with a plain cake. And," he added, "I had one customer who said he wanted to pour it over a friend!" We laughed politely.

He had at least another 40 ideas for what to do with his chocolate-orange wine, and he recited them all at top speed while showing us pictures of his mother when she was six. Then he led us to the fermentation room, with its huge bubbling vats and bright pink walls. On a shelf at practically ceiling height were a tiny chair and a harp. I had the feeling that late at night Van der Veldt sat, alone, playing to his chocolate-orange wine.

Our next expedition was to the Joel Palmer House (600 Ferry St., Dayton, OR; 503-864-2995), where two of Paige's great-uncles had sometimes gone to visit Joel Palmer (an explorer and Federal Indian agent) back in the 1860s. The grand old southern-revival house had been converted into a restaurant about a year ago by its current owner, Jack Czarnecki. He is a chef and a mushroom enthusiast, and at the Joel Palmer House he serves basically nothing but mushrooms. There are five or six mushroom appetizers and a dozen or so main courses of mushrooms, sometimes accompanied by meat or pasta. Since the restaurant is in the Willamette Valley, Oregon's most renowned winemaking region, it has an enormous wine list with many hard-to-get local bottles.

As we waited for our food, I leafed through Joe's Book of Mushroom Cookery, which Czarnecki wrote in honor of his father. (Back in 1916, Czarnecki's grandfather opened a tavern in eastern Pennsylvania; his son, Joe, Jr., inherited the place and put wild mushroom soup on the menu, then left the restaurant to Jack.) I was particularly taken with a section in the back of the book called "Situations and Menus," which covered mushroom crises in a sort of Dear Abby style.

"Paige," I said, reading from the book, "what would you do if a neighbor offered to share his wild mushrooms but only gave you five?" Before she could answer, Czarnecki stopped by our table. As I dug into my dinner (morels stuffed with chicken pâté followed by a tart of stinging nettles and shiitake mushrooms, then penne with lamb, morels and sausage), he spoke with bliss about how each morning gatherers show up at his back door with wild mushrooms. I was also ecstatic, not only because I was consuming delicious mushrooms but because I felt as if I had found a corner of America where everyone, in an unpretentious way, was fascinated by food. It reminded me of the way the writer M.F.K. Fisher had described the French of the Fifties.

James Beard would have been very happy about this too.

TAMA JANOWITZ, the author of Slaves of New York (Simon & Schuster), will publish her sixth novel next summer. She lives in Brooklyn with her husband and daughter. 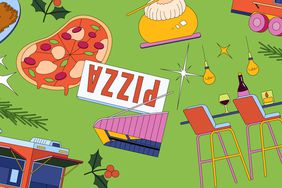 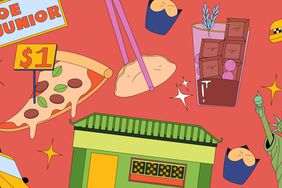