Or how a New Yorker in London spent 40 hours on the phone (and $420 on candied yams) to make his first holiday dinner.

The year after I finished grad school, I moved into an apartment in London, where I had my first kitchen. I was at that time an enthusiastic consumer of fine cooking, but the only piece of kitchen equipment with which I was entirely comfortable was the dishwasher.

At the end of two months in my new place, I felt proud and accomplished. I had mastered the art of getting a roast chicken and some steamed asparagus to come out at the same time. Heady with this success, I decided that I could do anything in the kitchen. It was the only year I have ever spent Christmas away from home and, refusing all invitations, I decided to stage my own Christmas dinner for a variety of American friends similarly far from their families. It was as though, having learned how to ride a bicycle, I had blithely climbed into the cockpit of a jumbo jet.

The episode has since come to be known as the Telephone Christmas. I called my mother and we went over the basic menu of Christmas dinners past. She recited a few recipes, which I wrote down. She helped me make a schedule that would spread the work over three days, each of which was to be easy and stress-free. We spent a good three hours on the phone figuring out the details.

On December 15, I set out to buy ingredients. In keeping with my plans for a pecan pie, I went to my neighborhood greengrocer and asked for corn syrup. I might just as well have asked for eye of newt or toe of frog. The grocer explained to me, confidingly, that you couldn't get syrup out of corn. When I insisted otherwise, he told me that if I bought some canned corn and got rid of the corn, I'd have some liquid left behind, but that he wouldn't call that syrup. I explained that I was making a pie. He said that pies don't have corn in them. Five days later, I found "Corn Syrup from America" at Fortnum & Mason for $15 per bottle, tied up with red ribbons as though it were a stocking stuffer.

Then I went to Sainsbury's, the big grocery store. I asked where I'd find the tinned candied yams. My mother had said that since I was doing everything else from scratch, I should give myself a break and use canned yams. She told me that by the time I'd added various extra ingredients and baked them in a casserole, no one would guess they were not fresh. Unfortunately, no one at Sainsbury's had ever heard of tinned yams (or corn syrup). Neither had the people at Fortnum's (where there was also a display of "Cranberries from America"). At Harrods, they told me they had tinned candied yams on special order, sold in lots of 12 tins. Hoping that over time I would have use for 12 tins of yams, I agreed to take 12 tins for $35. I left an imprint of my credit card. Three days later, I returned to collect my order. "Oh," said the man at the front counter, "you're the yam man." I smiled politely. "You must really like these things."

I had somehow failed to understand that "special order" meant that the yams would be purchased by a person in the U.S., put in a taxi to the airport, carried by plane to London and brought to Harrods in another taxi. I had committed to a case of S&W candied yams that cost, to my total astonishment, $35 per can. That was $420 for a box of 12 cans. After some extensive conversation about fiscal responsibility, my father agreed to cover the costs of the Yam Episode.

ONCE I HAD ALL THE INGREDIENTS, THE PREPARATIONS BEGAN. The first day was cranberry day. My mother always made two kinds of cranberry sauce: one cooked, with ginger, the other raw, with orange. The raw-with-orange one went just fine, though I covered my shirt, my jeans and (oddly) my socks with cranberry. Unruffled, I put the cranberries for the cooked-with-ginger version into a pot and lit a low light, then went into the next room to change my clothes. I sat down with a book and waited for the berries to start popping, which they soon did. It was only afterward that I noticed the words "a covered pot" in my notes. By that time, my little kitchen looked like the scene of a shoot-out, with strange red splotches on every wall, some of them dripping in a sinister fashion: long red steaks that went behind the oven and under the sink and down the backs of the doorknobs. I covered the pot. While I scrubbed down the walls, the cranberries continued to pop.

Then they stopped popping. I looked at the third line of the four-line recipe. "Whatever you do, don't overcook it until the cranberries get mushy," I read. I took the cranberries off the stove. "Now mix in the stem ginger which you have diced while the cranberries were cooking," I read. Fearful that I would overcook the cranberries but also concerned that they would somehow reject the ginger if they got too cold, I put the pot of cranberries in the oven and diced the ginger. The mushy cranberries now broiled. It was in this way that I discovered a surprisingly successful caramelized ginger cranberry sauce.

That was the first day.

The second day was stuffing. My mother had told me to keep the broken-up stale bread and the seasonings and the cream and so on off to one side while I sautéed the items I would be adding in separately--celery, onions, sage, wild mushrooms, veal sausage and so on--draining the pan after each item to prevent the different flavors from blurring into greasy banality. It did not occur to me that one could sauté these items sequentially in one pan, so I took all four of my pots and put one on each burner of my diminutive stove and stood over the four stirring away with a wooden spoon. The doorbell rang as the turkey arrived; and when I staggered back into the kitchen with it, the spoon was on fire. Using a pair of asparagus tongs, I removed the burning spoon and put it in the sink, where it melted the stopper for the drain. I reported the episode to my mother. (We had spent perhaps 15 hours on the phone by then, working through each drama.) "Well," she said, "better the spoon and the plug than you, the house or the stuffing."

I managed to make the yams, the salad, the dill bread and the chestnut puree without incident.

I also made the candied orange slices, the Christmas cookies and the eggnog without incident.

Then came the pecan pie. I had never before baked a pie. My mother had started to give me a simple piecrust recipe, but I said I wanted to make the same crust she always did, which was mostly butter and "tricky," she warned me. I said I was game. She said that the crust should be rolled out on a marble slab. Since my kitchen did not contain anything much like a slab, its counters being undersized and made of perpetually sticky, faded brown Formica that seemed to be biodegrading rapidly, I removed the various decorative objects from the front hall table (it had come with the apartment and was too heavy to move) to reveal a particularly pretty piece of marble distinguished by an etched border of acanthus leaves. For days after Christmas, I was to find pastry in the filigree. But that was later.

Now I called my mother. (We were nearing 30 phone hours by this time.) I had refrigerated the dough to within an inch of its life. With the same elaborate and specific rhetoric and the same air of supernal calm employed by a ground crew directing astronauts in orbit, my mother said: "Put the ball of dough on the marble slab." I hadn't told her it was the front hall table; some things it was best she not know. "Take the rolling pin and gently press down so that the ball begins to flatten into a pancake. Roll once in one direction, and then roll the second time across that direction."

I did as I was told. "It's sort of breaking apart," I reported.

My mother remained focused and clear. "You are pressing too hard," she said. "Lift the pin. Now, take a drop of ice water and use it to repair the split. Now roll again."

"OK, I'm lifting the pin. I'm putting it down again. This time it's not breaking."

"Good. Now try drawing the pin toward you."

"You're pressing too hard and by now your dough is too warm. Roll it back in a ball, put it back in the refrigerator and call me in an hour."

On the fourth attempt, the piecrust rolled perfectly.

On Christmas Day, I got up and stuffed the turkey. "It doesn't fit," I said.

"Both cavities," my mother answered. She was arranging the table at the other end of the phone. I could hear my brother singing carols in the background and my father opening drawers as he looked for something. "Listen," my mother said, "everyone is going to arrive here any minute. Anything else you need to know?"

"This oven doesn't have any 375°," I said, looking at the "heat settings," which were numbered 1 to 5, and which a manual I had found translated to centigrade. We did some quick math. The doorbell rang at my parents' house. While I finished cooking, I said hello to all the crowd at home. It was odd to think that 3,000 miles away they were smelling the same familiar smells that I was smelling. I spoke to extended family in sequence for another hour (the total was nearly 40 hours of conversation, we discovered when our phone bills came) while the turkey roasted.

"There can be little question," my mother was to say after the fact, "that it would have been cheaper and easier for me to take a plane to London, cook that dinner and catch a plane back in time to do Christmas in New York." "But," she added, "then I would have felt like you were away at Christmas, and this way I felt the whole time as though we were in the kitchen together." Every December from then until she died, we cooked Christmas dinner together, and now, seven years after her death, though I am sometimes flummoxed by a simple rack of lamb, I can turn out Christmas dinner for 16 adults (and little Calvin, my nephew, who will someday learn all these things too) as though I were to the kitchen born.

Andrew Solomon, the author of A Stone Boat (Plume/Penguin), is currently at work on a book about depression. 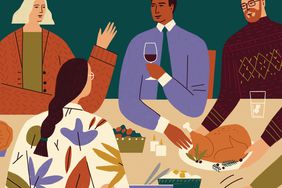