Pete Wells squeezes sustenance and pleasure out of stale bread, sprouting onions and a two-year-old box of lentils as he investigates a Brooklyn-style cucina povera.

Saturday morning, I woke up and decided not to buy any food until Monday. In warm weather this would be reasonable, because the refrigerator would be crowded with fruits and vegetables that my wife, Susan, and I had lugged home from the farmers' market. But this was January, at the front end of a searing cold snap, and the fridge, cupboards and freezer were exhibits in a museum of oddities. A cloth sack of rice. A nearly complete set of chicken giblets. Two rolls of film. Marmite. There could have been a rack of wildebeest under the ice-cube trays. Honestly, I had no idea what was in our kitchen. Cooking six meals straight without leaving home was one way of finding out.

I also hoped that my self-imposed performance of Survivor: Brooklyn would push me into uncharted reaches of my cookbook shelf. The problem of what to cook when the pantry is bare is one that every culture on earth has wrestled with, as have some of the best food writers. For years, I've read and reread certain recipes for squeezing sustenance and even pleasure out of severe hardship, and wondered about them. When hunger looms, though, my curiosity slips away. Now, if I was going to last the weekend without reinforcements, these books would have to talk me through it.

So: Breakfast! How to Cook a Wolf, M.F.K. Fisher's book of idiosyncratic advice for weathering the rationing and shortages of World War II, prescribes "some brown nutty savorous porridge." No problem—I reached above the microwave for a can of Irish oatmeal. I was out of the maple syrup and chopped dates Fisher recommends, but in the back of the refrigerator was a bottle of sorghum I'd brought back from Tennessee two years before. All my days should start so well.

After breakfast my eyes settled on a half-empty jar of peanut butter, and I determined, for no rational reason at all, to fashion lunch around it. I remembered a chapter on cheap Chinese noodles in John Thorne's Outlaw Cook. I'd always had dandan noodles made with pork and sesame paste, but Thorne had a meatless variation using peanut butter. He seemed to know just what I lacked and to have a fix ready. Out of Chinese black vinegar? Try balsamic. No fresh egg noodles—or, for that matter, eggs? Spaghetti will do fine, Thorne promised. I made one unauthorized switch, adding heat with Thai chili-and-garlic paste rather than chile powder. What I wound up with bore little resemblance to the dandan noodles at my favorite Manhattan Sichuan restaurant, but Susan and I agreed it was far better than peanut butter and spaghetti had any right to be.

This corner I'd painted myself into was feeling more and more comfortable. Susan and I once spent a winter in Provincetown. When the summer people left with their summer money, the farm stands closed, then the bakery, and finally the fish shop. The last loss really hurt. We were in a fishing village, surrounded by water on three sides, on a piece of land called Cape Cod, and the only place to get a fresh cod fillet was a 45-minute drive back toward the mainland. Our meals that winter grew out of basics from the town's sad, understocked A & P: pasta, eggs, lentils, kale, Portuguese sausage. It should have been depressing, arranging the same plain items in new patterns night after night, but we found it rewarding. Paradoxically, with fewer choices you think harder about the possibilities. If your meal turns out well, you feel like a magician slipping out of a straitjacket. For our dinner in Brooklyn, then, we ate lentil stew with sausages from the freezer. But the lentils never relaxed; even after two hours they kept a hint of crunch. They came from a box dated 2003.

That was Saturday: oatmeal, noodles, lentils. Grains and beans. Without even thinking about it, I'd fallen back on the same foods that people with no money have relied on forever. (Lentils were among the first cultivated crops.) The Italians call this kind of cooking la cucina povera, a lyrical phrase that almost makes poetry out of poverty. Many Americans now study Italian cuisine the way Renaissance thinkers pored over ancient Greek manuscripts, with the same sense of reclaiming lost wisdom. Like most cults, this one gets absurd at times. It is one thing to smack your lips in wonder at the powerful flavors of cucina povera. It is quite another to spend $40 for Laudemio olive oil and imported beans. And by the time you find yourself in a Tuscan village taking the seven-day cooking course on cucina povera that one Italian-vacation packager offers for about $2,000—well, you are some distance from the peasants, spiritually if not geographically. The lessons of cucina povera are elsewhere.

Sunday did not start well. I returned to How to Cook a Wolf, but this time the wolf bit me. Fisher merrily urges "piles of toast, generously buttered, and a bowl of honey or jam." She continues, "You can be lavish, because the meal is so inexpensive. You can have fun..." My piles of toast were all right, but no fun. A slice of ham would have helped, or some eggs, but by this point our protein stores were running perilously low. I sat down to think my way into a decent lunch and decided it was time for one of those recipes that fascinated and frightened me: the onion panade in Richard Olney's Simple French Food.

Panades belong to a set of European peasant dishes built on the unpromising foundation of stale bread and water. The Portuguese have açorda; in Italy, there is acquacotta; panade is the French version. In darker days, this was merely dried-out bread baked with water. Onion panade is a less dismal variation, ancestor of the beloved French onion soup. It can be made out of practically nothing—or, to be exact, stale bread, cheese and onions.

A month before, Susan had hosted a baby shower, and after the shower we were left with a sliced-up baguette and a big knob of cheese. Olney demanded sourdough and insisted only Gruyère or Parmesan would do. Our orphan cheese had no label, no name. It was covered with inexplicable scratchings and tiny nibbles, as if it had been left with a bored gang of mice. Olney also called for white summer onions or Bermudas. I had one of those orange mesh bags from the supermarket; inside I found exactly one decent mid-sized specimen and enough spongy, smelly, sprouting onions to start a compost heap.

America gives us more choices than we need: too many channels, too many Benjamin Moore paint chips, too many ways for Starbucks to overcharge you. Eventually you learn to shop first and ask questions later. This is how you find yourself buying a $40 bottle of olive oil when what you are really hungry for is a plate of beans. There are cures. You can drive to Provincetown or another remote place. You can run out of money, although in my experience that rarely helps clear your mind. Or you can simply pay more attention to what you've already got. If I'd been doing that, my lentils would have been ready in half an hour and my onions wouldn't have had green tails.

I had another bag of onions. About 30 small ones, the size of Atomic FireBall candies. Slicing them into rings was a job for a surgical laser, not a chef's knife. Running across the street to the supermarket for a few fat yellow onions would have been easier and faster. I didn't do it.

This is what I did. Peeled and sliced 30 tiny onions. Caramelized them for two hours. Layered stale bread, caramelized onions and mystery cheese; bread, onions, cheese; and finally, just bread and cheese. Funneled salty water into the casserole. Baked it for an hour and a half.

Susan and I were a little freaked out by how delicious it was. We were so proud of our something-from-nothing triumph that we decided it would be okay to buy a skirt steak for dinner. 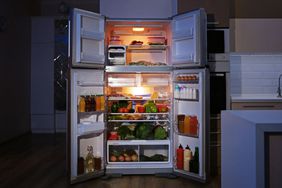