The Okra Project and its founder Ianne Fields Stewart are seeking to honor the lives of Black trans people, starting with healthy, home-cooked meals.

What do okra and Black trans people have in common? It may seem like an unlikely alliance, but in fact, it was destined. Okra—a divine crop plucked from the fields of West Africa and protected in the hands of enslaved Africans—is a widely overlooked and often unjustly dismissed vegetable. Yes, it serves its purpose in wonderful dishes like gumbo or bamya or bhindi masala, but you rarely see it on menus in the US outside the American South, the African American diaspora, or restaurants deemed "ethnic" by white people. Black trans people are a vital part of the LGBTQ+ community, but their existence has historically been marginalized by many members of the gay community and white trans community, as well by society at large. This has resulted in many people within the Black trans community being vulnerable to domestic and economic inequalities. The Okra Project and its founder Ianne Fields Stewart are seeking to right this injustice, starting with healthy, home-cooked meals.

A study done by Emory University's Rollins School of Public Health found discrimination against Black trans people to be disturbingly prevalent—highlighting education, housing, health care, and employment as areas many members of the community find inaccessible. Along with this comes food insecurity and hunger. Without access to the same resources as their cisgender and white trans counterparts, they are often left destitute, without fresh or nutritious foods—like our beloved okra.

There is nothing that heals the soul more than a home-cooked meal made with ingredients you are familiar with, and prepared by the hands of people who look like you.

When Africans were stolen from their native lands, chained, bound together within inhumane conditions on ships, to be forced onto unfamiliar land to work without compensation; many of them brought okra pods and their seeds as sustenance. Some would hide the seeds in their hair in hopes to plant them in this new land. They knew okra was one of the only tangible connections to their homeland, and a necessary healing for their soul. There is nothing that heals the soul more than a home-cooked meal made with ingredients you are familiar with, and prepared by the hands of people who look like you.

This is the premise of the New York non-profit initiative The Okra Project. Conceived by queer, trans, non-binary activist, Ianne Fields Stewart, this initiative provides access to healthy food for Black trans people who are facing food insecurity. Monetary donations allow chefs—who are trans themselves—go into people's homes and provide free home-cooked meals. If the recipient is unsheltered, prepared meals are distributed to them. The project also provides resources and spaces to encourage sustainable independence, including The Okra Academy where trans folks learn basic cooking skills.

The project has been very successful, reaching over 200 people with home cooked meals, while thousands have also benefited from their relief initiatives which include funds for groceries and COVID-19 relief. The project has even expanded to Philadelphia and New Jersey due to high demand and community outreach within those hubs.

The Okra Project's very name is a testament to the importance of maintaining a sense of culture, community, and health. As Stewart explains, "There's a history of okra providing a sense of sustenance, community, and solidarity." The okra that Africans took great pains to keep safe was a beacon of hope. It was a way for them to bring a part of their identity as they faced adversity. This is the same ideology Stewart and The Okra Project's team are using to help those within the Black trans community who are without the resources to meet their basic human needs.

For generations, Black people have cherished okra, not only for its culinary application as a thickening agent or its nutrient density, but as a memento of what they have overcome. From the trenches of slavery, Jim Crow, the fight for civil rights, and against police brutality, Black people have been routinely and systemically marginalized. They will never forget okra's origin of creating a shared identity in an unaccepting world, and that is what The Okra Project is doing with the Black trans community.

It is time for their voices to be heard, bellies to be full, and hearts to be fulfilled.

"Our job is to reach, support, and uplift the community by the community," says Stewart. Black trans people are especially discriminated against in this country, and even in their own queer communities. It is time for their voices to be heard, bellies to be full, and hearts to be fulfilled. The Okra Project is creating new systems to ensure those rights are achieved and that these vital members of society will never again be forgotten.

"We are a small team, but a determined team," says Stewart. She hopes The Okra Project will reach cities across the nation in the near future, and believes that having someone cook a meal for you should not be considered a luxury.

"I want to take those things considered luxuries and make them accessible," Stewart says. Black trans people should by all rights be afforded those things and just like okra, their shared identity is the sustenance they need to survive.

Paul O. Mims (He/Him) is a writer, educator, and podcast host, focusing on food and culture. When he is not teaching cooking classes in drag, he spends his time advocating for Black and queer issues. 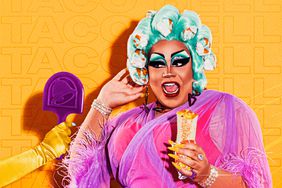