Drawing on the best ingredients in Italy—and beyond—chefs like Umbria's Salvatore Denaro are bringing new vitality to the trattoria tradition.

Il Bacco Felice ("The Happy Bacchus"), under chef-owner Salvatore Denaro, is an example of a new trend in Italy: a revival, spontaneous and mostly unacknowledged, of trattorias, those animated eating places known for serving the kind of old-fashioned comfort food that forms the very foundation of Italian cooking. But restaurants like Il Bacco Felice are not typical trattorias. Attracting a younger generation of well-traveled and sophisticated Italians, who expect to be a little challenged by what's on their plates, the new trattorias are turning out dishes that require a gifted hand, fierce attention in the kitchen (and in the market and garden, too) and a willingness to experiment.

Denaro and his peers are creating trattoria food with a difference, using unusual ingredients to create modern dishes that are firmly grounded in enduring Italian tradition. After years of looking outside of Italy for inspiration—to the haute cuisine of France and the fusion of Spain—with a perceptible sigh of relief, these chefs are returning to what they do best.

For Denaro, the unexpected touch that transforms his trattoria dishes might be as simple as the southern Italian green olives and dried oregano the Sicilian-bred chef adds to a classic bread-and-tomato salad. Or the complex rub of oregano-spiked vinegar and a condimento of aromatics, including Turkish bay leaves and Sardinian myrtle, that he uses to flavor his pollo alla diavola, a central Italian grilled chicken ordinarily flavored with dried red chiles and black pepper. His condimento, which he blends and then grinds to a powder, is powerful stuff: "You could bottle this and make a fortune!" I said the first time I smelled it.

Since trattorias are almost always owner-operated, what characterizes a good one more than anything else is the personality of the owner, the padrone—in Denaro's case, an ebullient, nonstop enthusiasm. In a trattoria, the padrone is always present: If for any reason he or she must be absent, then the place is simply closed.

Denaro sometimes calls his restaurant an osteria and sometimes a locanda, and one guidebook calls it an enoteca or wine shop, but to his customers, it's the epitome of an utterly unassuming trattoria. At first glance, Il Bacco Felice seems to be just a grocery–cum–wine shop. The narrow entrance is filled with towering stacks of wooden wine cases; dusty bottles of grappa and olive oil; sacks of locally grown Castelluccio lentils, chickpeas, farro and tiny risina, rice-shaped white beans grown around Umbria's Lake Trasimeno; jars of honey, preserves and pickles; braided strings of onions, garlic and chile peppers. Past all this apparent disorder, however, is a tiny kitchen and a dining room that seats 25 or 30 people at most.

Dining at Il Bacco Felice, I soon found, is like eating in a big, old-fashioned, rural family kitchen. Denaro, at the slicing machine, is preparing an antipasto platter, carving slices of a boned and tied prosciutto from near Naples. As he carves, he passes slices to whomever happens to be around. "Here, try this," he cries. "It's an ancient technique; you don't get this anymore. How sweet it is!"

He stops to find a special wine, a rare vintage of local Sagrantino, opens it, slurps some in his glass, groans with pleasure, then spills some into my glass before taking it to the table that has ordered it. There's no menu at Il Bacco Felice. Instead, the chef tells you what's on offer that day. Later he will sit down with you, help himself to a glass of your wine and discourse passionately on what you're eating and drinking, as well as what you're not.

There are always choices. Recently Denaro offered potato soup with artichokes because it was the end of the season for the deep-violet carciofi moretti, a type of purple artichoke that he favors. Then there was porchetta, Umbrian roast pork that Denaro had flavored with fennel pollen, or his special pollo alla diavola, devil's-style chicken. When the bird came out, Denaro hovered over the table of guests who'd ordered it: "Use your fingers," he urged, "we're in the country here."

Denaro takes full advantage of Foligno's location in Umbria, the green heart of Italy. Umbria's small farms provide extraordinary oil from moraiolo olives, as well as vegetables, wheat and legumes, and pasture for sheep, pigs and other farm animals. Improbably enough, that fennel-flavored pork came from Cotswold pigs raised by an Australian in the hills above Orvieto, the kind of globalization it's easy to get behind. Nearby Montefalco is the center of a wine area that has stirred enormous interest, at home and abroad, with big, dark reds made from the mysterious Sagrantino, a local grape some associate with the Umbrian Saint Francis of Assisi.

With lunch over, Denaro doffs his chef whites and hitches up his suspenders. Rosa, his dog, leaps joyfully into the back of his van, and away we go to the orto, the garden that is his pride, providing many of the vegetables for the restaurant. Fava beans—a small, tender variety grown from Sicilian seeds—are swelling to perfection, and salad greens thrive next to just-transplanted tomatoes. Wandering into the surrounding fields, Denaro returns with armfuls of wild dandelion greens, then pulls a handful of garlic shoots, their cloves as yet unformed. "Smell!" he commands, shoving the provender at me. "Take this home and cook it for your supper. You'll never eat anything better." And he is right. 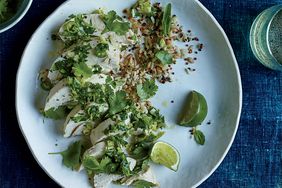 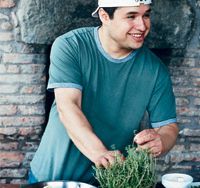 18 Spooky Recipes to Make for Halloween 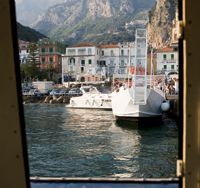 Cruising the Mediterranean with Jacques Pépin