Last week, Tesla held what Bloomberg described as an "Oktoberfest-style county fair" just south of Berlin, Germany, at the site of its still-under-construction Gigafactory. Tesla CEO Elon Musk addressed the 9,000 person crowd, to discuss the facility's eventual manufacturing capabilities — he believes that it could eventually produce 10,000 vehicles a week — and to talk about some of the amenities that it will have for the employees who work on-site.

"We're gonna build a train station that's right on the property," he said. "And then we're gonna have graffiti murals all throughout the factory, on the outside and everything. So I think that's gonna be pretty cool. We've got some of them already. And we're even gonna have a beer."

When Musk mentioned the beer, a 3-D rendered image of the "Gigabier" bottle appeared onscreen behind them, and the brew's design aesthetic has been borrowed from Tesla's own Cybertruck.

Musk didn't provide any additional details about the Gigabier, other than its name and bottle design. This wouldn't be his first Tesla-adjacent booze though: last year, Tesla launched its $250 Tesla Tequila, which sold out almost immediately. (And when it was eventually restocked on Tesla's website, it sold out even faster.) Tesla Tequila started as an April Fool's joke on Musk's Twitter account in 2018, but he got serious about the liquor later that year when he filed for a trademark for the name "Teslaquila."

That name didn't stick, because the word "tequila" has a designation of origin in Mexico. The country's Tequila Regulatory Council (CRT) told Musk that he couldn't trademark "Teslaquila" because it was too close to that other T-word. "If [Tesla] wants to make Teslaquila viable as a tequila it would have to associate itself with an authorized tequila producer, comply with certain standards and request authorization from Mexico's Industrial Property Institute," the CRT said in a statement. "Otherwise it would be making unauthorized use of the denomination of origin for tequila."

Tesla relented and eventually partnered with California's Nosotros Tequila to produce the 15-month French oak barrel-aged añejo. (Nosotros Tequila sources its blue agave from both the highlands and the lowlands of Jalisco, Mexico, which is one of the five Mexican states where tequila can be produced.)

Musk shouldn't run into any similar complications with the Gigabier but, if the demand for Musk's other side-projects like flamethrowers and Tesla-branded short-shorts is any indication, those Cybertruck-inspired bottles will probably end up on eBay.de almost immediately after they appear in the Gigafactory's on-site cafeteria. 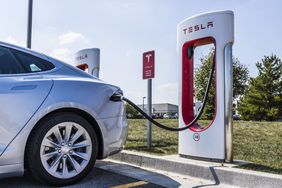