And yes, we asked them about bringing back the Mexican Pizza.

Last week, popular food blogger Markie Devo ignited the internet when he posted that Taco Bell's Mexican Pizza would make its triumphant return in "April or May 2022." The iconic item was removed from the menu in November 2020, along with a dozen other items, including Shredded Chicken Soft Tacos, Shredded Chicken Quesadilla Melts, and pico de gallo.

But nothing hit harder than the loss of the Mexican Pizza. A petition was quickly launched, and more than 170,000 people hoped that adding their signatures might be enough to change The Bell's mind. It didn't work.

Markie Devo did not share any additional details about the re-launch of the Mexican Pizza — and he didn't say where he got his inside info. Food & Wine reached out to Taco Bell and the chain declined to comment. What they did confirm, though, is that starting on Thursday, January 6, Taco Bell will be serving up orders of Crispy Chicken Wings.

"This special offer features five, bone-in Crispy Chicken Wings, coated in flavorful Mexican Queso seasoning, crisped to perfection and served along with our signature spicy ranch dipping sauce," a Taco Bell representative said in a statement. "Wings are the latest creation from the test kitchen masterminds." A box of five Crispy Chicken Wings will retail for $5.99, and will be available every day after 2 p.m. as a limited-time menu offering.

"Hey [Taco Bell], just heard my song in your commercial," she tweeted. "I'm a #TacoBellPartner now. So where's my Mexican Pizza?" Taco Bell didn't bite, responding with two eyes and a pair of lips emoji.

When the pizza was pulled last fall, the company said that there was an upside to losing the popular item. "One silver lining of saying goodbye to the Mexican Pizza that might help you rest easy is that removing it from our menus helps us work towards our commitment to leave a lighter footprint on our planet," Taco Bell said in a statement. "Currently, Mexican Pizza packaging accounts for over 7 million pounds of paperboard material per year in the U.S."

So if Markie Devo is right — and man, we hope he is — then maybe that means there's not only a new pizza, but new, more earth-friendly packaging too, which would be a double-win. Until we hear something more certain, I guess we'll have to try the chicken wings. 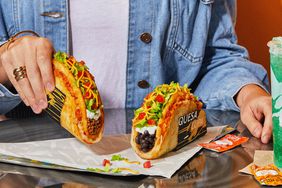