The act of vandalism cost the new owners $10,000 in live lobster.

On Friday night, the Sandwich (Mass.) Police Department was called to Superior Lobster and Seafood, to investigate some suspicious-looking activity that had been recorded by the Cape Cod seafood company's security cameras. At around 9:15 p.m. the previous night, a man was filmed as he threw trash in their dumpster, then he allegedly turned off the compressor and oxygen supply that kept the live seafood, well... alive in their tanks.

"The investigation revealed a monetary loss of approximately $10,000 in damaged seafood. The suspect observed on the video was positively identified as Joseph Vaudo," the Sandwich Police Department wrote on Facebook. "As a result, Joseph Vaudo was arrested and charged with Felony Vandalism of Property and Illegal Dumping."

The Cape Cod Times reports that Vaudo is the former owner of the company (previously known as Mr. Vaudo's Fish Market). He filed for Chapter 13 bankruptcy in March 2019, and when the case was closed in December of that year, the U.S. Bankruptcy Court, District of Massachusetts ordered him to turn the market over to a commercial rental property company.

Vaudo previously ran the now-defunct Joe's Lobster Mart for more than 40 years, but he lost his license to sell fish and shellfish in 2014 after pleading guilty to "receiving stolen oysters" and "not keeping proper shellfish records," according to the Times. Michael Bryant, who pleaded guilty to the oyster theft, told the court that he'd sold more than 20,000 stolen oysters to Vaudo.

Three years after his stolen oyster conviction, Vaudo was granted permits from the state and from Sandwich health department, which allowed him to open Mr. Vaudo's Fish Market. The state restricted Vaudo to purchasing fish and shellfish from wholesale vendors, and did not allow him to serve as "a primary buyer" for seafood -- but he still seemed pleased about the opportunity. "The state is giving us a second chance," he told the Times in 2017.

Last February, Darryl Durnford took over the former location of Mr. Vaudo's Fish Market, and it later opened as Superior Lobster & Seafood. The company's main product is fresh lobster -- so losing $10 grand worth of crustaceans is, you know, not great for them.

Joseph Vaudo is due to be arraigned in court on Monday. 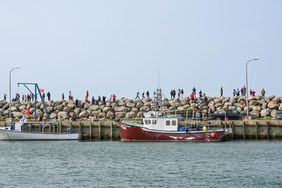