The supposedly permanent menu item turned out not be very permanent at all.

Popeyes didn't invent the fast food chicken sandwich. McDonald's has had a chicken sandwich since the 1980s. Instead, Popeyes' viral success left every other chain jumping on the bandwagon to hopefully capitalize off this surge in demand. And yet, if creating a mindblowing chicken sandwich was easy, Popeyes' sandwich probably wouldn't have seemed so extraordinary in the first place.

Which brings us to the Starbucks chicken sandwich. Admittedly, based on what we know about the Starbucks food menu, a fried chicken sandwich doesn't seem like it necessarily should be up their alley. But back in June, the coffee chain decided to try one for the first time anyway, releasing the Chicken Maple Butter and Egg Sandwich.

It didn't last long. As NBC News reported over the weekend, Starbucks quietly stopped selling the item on June 26, a mere five days after it had been announced as a new permanent menu item.

Reached for comment, a Starbucks spokesperson told us, "We issued a voluntary stop sell and discard on the Chicken, Maple Butter and Egg Sandwich because the product didn't meet Starbucks quality standards. We are committed to a high level of quality in the products that we serve and always act with an abundance of caution whenever a product or quality issue is raised. This is not an FDA issued recall nor is it related to salmonella or listeria contamination. The quality issue that was identified by Starbucks would not lead to food borne illness and any reports linking the stop sale to illness are inaccurate."

Of course, a statement that specific leaves you wondering what allegations were made, and, indeed, on Friday, the New York Post had written that "hundreds of customers and even Starbucks baristas" had complained on social media of "bouts with diarrhea, vomiting and stomach pain" after eating the new menu item. The paper also claimed it had seen an internal memo stating that employees should not only discard remaining sandwich stock, but also not donate them.

Pressed with a follow up question on whether the "stop sell" was simply about taste or based on another issue, the Starbucks spokesperson simply reiterated that the new chicken sandwich didn't meet Starbuck's very high quality standards.

Admittedly, Starbucks is in a tough situation. Even if the sandwich wasn't making people sick, that would imply that the sandwich was just, well, bad — neither of which looks particularly good for the chain. But either way, the whole saga seems to have a simple moral: Not every fast food chain needs a chicken sandwich, regardless of how successful Popeyes' was. 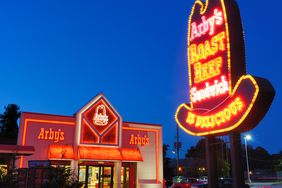