With new Andorian and Cardassian varieties, Star Trek now has six official wines — and you can buy them all for $299.

Debuting in 1966, the original Star Trek TV series ran for just three seasons — but the media empire it spawned continues to proliferate to this day: spinoff series, movies, books, games, and more. Speaking of more, in 2019, Star Trek launched its own line of wines — and now, similar to the series itself, that wine collection is also continuing to expand: Star Trek Wines has just announced the addition of two more bottles to its now six-bottle lineup.

To recap, Star Trek Wines launched with two options — Chateau Picard Cru Bordeaux and United Federation of Planets Old Vine Zinfandel — produced in partnership with Wines That Rock. (If that name sounds familiar, it's because they also make wines for The Hallmark Channel, NPR, and Downton Abbey, along with their namesake rock band-themed products.) A year later, in 2020, two more wines joined the mix: Klingon Bloodwine and United Federation of Planets Sauvignon Blanc.

Now, it's 2021, and as any serialized TV show knows, you need fresh content, so say hello to your latest season of Star Trek Wines: United Federation of Planets Special Reserve Andorian Blue Chardonnay (at $50 per bottle) and Cardassian Kanar Red Wine Blend (at $60 per bottle).

Since a fictional world can't produce (or even taste test) wines, as is often the case with these kinds of branded vinos, the look is as important as the liquid — and both these products are visually striking. (They're also all individually numbered to help hammer home their collectability.)

Incredibly, the Andorian Blue Chardonnay is literally blue, intended to pay "homage to the history of colorful Star Trek spirits." This unique hue is highlighted with a bottom-heavy clear bottle that is also adorned with "a special United Federation of Planets metal medallion." As for the wine, it's billed as "premium Chardonnay from Santa Lucia Highlands" that's been "aged 12 months prior to bottling and has delicious notes of citrus, peach and apricots."

As for the Cardassian Kanar Red Wine Blend, its eye-popping spiral bottle comes with its own backstory. "In a quest for authenticity, the team conducted a rigorous multi-year search for an original Cardassian Kanar bottle, a unique, serpent-shaped vessel, originally utilized in the 1950s through the 1970s in Europe," Star Trek Wines explains. "With only a handful of the original bottles found, the few remaining were rendered in 3D for accuracy in Southern Italy to recreate an identical replica, resulting in one of the most fascinating bottles in the Galaxy." As for the wine, the mix of Cabernet Sauvignon, Merlot, Petite Sirah, and Petite Verdot is said to result "in a dark, rich wine with notes of ripe blackberries and juicy blueberries, velvety tannins, and a long, delightful finish."

Both new wines are available for presale at StarTrekWines.com. Or, if you want to buy the whole six-bottle collection — "The Full Armada" — it's currently available for $299. Orders containing the two new wines are slated to start shipping in November. 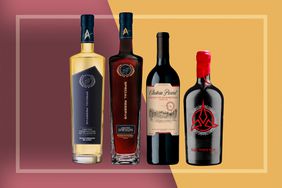