How to Make a Negroni, According to Stanley Tucci

He takes us step by step through his take on the classic cocktail.

At the beginning of April, Ina Garten charmed the internet with an Instagram cocktail demo, making a truly enormous Cosmo. Now, Stanley Tucci is getting in on the fun: The actor recently shared an IGTV video filmed by his wife, Felicity Blunt, in which he makes a negroni while soothing music plays in the background.

"Mostly, people have negronis on the rocks, but I think, actually, they're quite nice up," he says.

Tucci starts by adding a "fair amount" of ice to a shaker. Next up is a double shot of gin. Tucci says you can use vodka instead, and lace a little gin on top of the drink just to give it a bit of flavor. Then, Tucci adds a shot of sweet vermouth, and suggests picking up a good brand if you're able to find one. Add a single shot of Campari, and you're all ready to shake.

While Tucci likes to pour his drink into a coupe glass without ice, he explains that you can just as easily do it on ice with the exact same proportions. The final touch is a slice of orange. Tucci squeezes a little bit of the juice into the drink and then places the orange directly in the glass. Finally, he takes an appreciative sip and passes it to Blunt.

The video has gotten a lot of love, including from Chris Evans—Tucci was Dr. Abraham Erskine in Captain America: The First Avenger, and Evans played Captain America.

"I. Love. Stanley. Tucci. On some(most) days after we finished filming on the first Captain America movie, Stanley would make us martinis in his trailer," he tweeted. "He's an absolute gem. However cool, fun, witty, and charming you think he is, double it and you're halfway there."

Tucci and Garten aren't the only ones posting cooking demos to social media, either. As people have been staying home and social distancing due to the coronavirus pandemic, several chefs and food industry professionals have been sharing fun videos, including Massimo Bottura, Michael Symon, and Rachael Ray—check them out in our roundup. 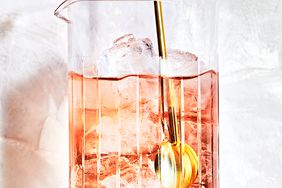 How to Make a Stirred Cocktail Like a Pro