Last night, South African president Cyril Ramaphosa grimly addressed the nation, reporting that an additional 12,058 cases of coronavirus had been confirmed on Sunday, bringing the country's total to 276,242 cases, with more than 4,000 deaths. Almost one-third of the cases are in its most populous Gauteng province, which includes the cities of Johannesburg and Pretoria, while South Africa itself accounts for 40 percent of the confirmed cases on the entire African continent.

As a result of the rapidly increasing numbers, Ramaphosa announced a nightly curfew between the hours of 9 p.m. and 4 a.m., emphasized that family visits and social gatherings are still prohibited, and made mask-wearing mandatory for all public places. He also re-instituted a ban on all alcohol sales in the country in order to save medical resources and hospital beds for coronavirus patients.

"There are a number of people who have taken to organising parties, who have drinking sprees, and some who walk around crowded spaces without wearing masks," he said, according to the BBC.

Alcohol sales in the country had just been allowed to resume (with some restrictions) on June 1, after being banned for the first time in March. But Ramaphosa said that there was "clear evidence" that a return to readily available alcohol had caused an increase in the number of emergency and ICU patients in South African hospitals, due to car accidents and booze-fueled violence.

“As we head towards the peak of infections, it is vital that we do not burden our clinics and hospitals with alcohol-related injuries that could have been avoided,” he said. "This is a fight to save every life, and we need to save every bed. We have therefore decided that in order to conserve hospital capacity, the sale, dispensing and distribution of alcohol will be suspended with immediate effect.”

According to The Drinks Business, a number of alcohol-related trade groups expressed their concern about the second booze-related ban, warning that it could affect the livelihoods of as many as one million people who were employed as part of the "liquor industry value chain." During the first alcohol lockdown, they estimate that the country's alcohol industry lost R18 billion ($1.07 billion USD) in revenue, and another R3.4 billion ($204 million USD) in excise taxes, as a result of a spike in sales of untaxed black market alcohol.

"[W]e were not consulted on the decision the president took yesterday," Kurt Moore, the CEO of the South African Liquor Brand Owners Association, said on Monday. "It spells potential disaster for the industry and job losses loom. Making an announcement like that without forewarning us presents us with a lot of logistical challenges, but yes we are really disappointed with the news."

Meanwhile, substance abuse counselors have warned that forcing those with alcohol dependencies to quit cold turkey could have serious health consequences. "Those who are properly into alcohol addiction can get withdrawals, which can be quite dangerous. You can end up having seizures and other medical problems," Taku Mhonyera, the head of addiction treatment at Johannesburg's Crossroads Recovery Centre, told Sowetan Live. “People will be resourceful and make their own alcohol, but that’s dangerous because most don’t know what they are doing and could poison themselves."

Regardless of the challenges, Ramaphosa remains resolute that this is the best course of action for his country. "We are in the midst of a deadly pandemic and we must act accordingly," he said. "We must all be responsible. The truth is we are not helpless in the face of this storm." 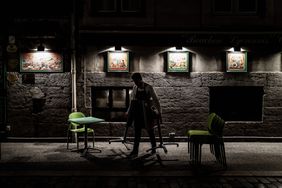