The Pandemic Closed Their Bars, So They Planted a Bartenders' Garden

Keyatta Mincey-Parker’s Sip of Paradise garden has given Atlanta’s out-of-work bartenders a place to gather.

When the pandemic hit last year, some people jumped on the bread-baking trend to keep themselves busy. Others, like Atlanta bartender Keyatta Mincey-Parker, turned to gardening to ease their COVID anxieties. Already an avid gardener, Mincey-Parker managed to transform the East Atlanta urban garden that she planted with her husband into a little slice of paradise for local out-of-work bartenders.

"Originally, it was just going to be a bartenders' garden—a way for us to have a place to have," said Mincey-Parker. "I found how much gardening relaxed me, and it was something I enjoyed. The fact that it's happened to turn into a refugee haven because of this dumpster fire of a pandemic is just circumstance."

The garden, aptly named Sip of Paradise, has become a much-needed creative outlet for the Atlanta bartending community, allowing them to recharge and destress in a safe space. The garden combats food insecurity by letting members grow their own veggies and herbs to take home. It also gives them a sense of community that they were missing after all the layoffs and bar shutdowns.

There's a history of gardens creating a sense of place during tumultuous times. Since the 1890s, Americans have turned to community gardens to confront social issues; the victory gardens during World War II also helped ease food shortages. During the pandemic, Sip of Paradise is helping alleviate bartenders' anxiety and loneliness by giving them a cheerful space to go instead of just sitting at home stressing over things they can't control.

"I think having an open space kind of restarted our community," said Mincey-Parker. "You came here and saw someone you knew or saw someone you didn't know, but you were able to talk to them in some sort of fashion. One member said that if they didn't have someplace to come to, they would have killed themselves. This kind of stuff made me cry."

Mincey-Parker and her all-female gardening crew's efforts have not gone unnoticed. Bombay Sapphire jumped at the chance to help finance the project as it was getting off the ground last year. These days, Mincey-Parker is focusing on developing her 501(c)(3) so that others can invest in Sip of Paradise.

"Brands have definitely been helping," said Mincey-Parker. "Now that we have been established for a year now, on our end, we have to tighten up and look like the business that they've been investing in. I have tightened up my team and delegate work to others. I have a focused plan, whereas last year we were kind of flying by the seat of our pants."

As for Mincey-Parker's long-term plans, she wants to expand the idea to other cities. She'd love to start a bartenders' garden in every major city and even overseas, including Liberia, where she is originally from. She also plans on having more cocktail competitions, bar education courses, and wellness seminars to ensure a better experience for her gardeners.

Mincey-Parker also hopes to eventually build a headquarters for her nonprofit. She doesn't quite know how she'll make it happen just yet, and she says she's leaving it up to the universe. "I don't know how this building is going to come," she said. "All I know is that I've claimed it. I've spoken it, and I'm going to get a building—period." 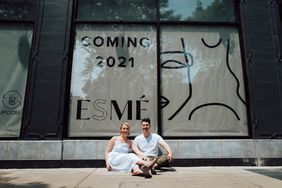