A group of Dutch shrimp fishermen had an unexpected — and inedible — catch last week, when they caught a centuries-old wooden statue off the coast of Texel. Their surprising solid oak haul was incredibly well-preserved, especially since it could have been underwater since the 17th century.

Victor Ayal, one of the fishermen onboard the ship Wieringen 22, posted several photos of the carefully carved head on Twitter on Monday. "We fished this wooden (figurehead) statue this morning on the Wadden Sea," he wrote. "Does anyone have an idea of the time when this is from?"

It turns out, yes, some people did have a pretty good idea of the statue's history. Michiel Bartels, a municipal archaeologist for that region of the Netherlands, told the Leeuwarder Courant that he believed the "very special discovery" came from a warship, possibly during the Eighty Years' War, which stretched from the mid-1500s to the mid-1600s.

Bartels told the outlet that the man in the carving was wearing a specific kind of headgear called a Phrygian cap. "This hat symbolizes freedom and independence," he said. "The Phyrigians were enslaved by the Romans. Slaves were shaved bald. When released from slavery, [Phyrigians] wore a cap to hide their baldness and signify their freedom. During the Eighty Years' War, the symbol came back as a sign of independence."

The statue, which the fishermen nicknamed "Barry," has had a busy week. After being pulled out of the sea, he was kept in an eel tub filled with salt water to ensure that he wouldn't dry out. He's also had at least one talk show appearance, and has worn Ayal out. "The family also met #Barry. The media frenzy is over," he tweeted on Thursday. "An expert accompanied him [to the city of Hilversum]," he added. "I've been in the spotlight enough for the rest of my life."

Bartels, the local archaeologist, thinks that finding Barry could be a sign that someone needs to do a bit more underwater exploration in that area. ""I think this is a reason to go and see what else is out there," he said. "A diving group has to search there quickly. Who knows, we might even find a complete ship."

Or, if they're really lucky, they might just find …a lot of shrimp. 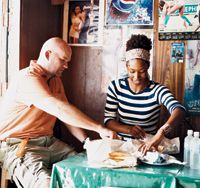