The r/FoodNYC subreddit's moderators even posted rules for the practice as pandemic-related issues continue to upend people's plans.

As of this writing, the newest post on the r/FoodNYC subreddit is from someone who is trying to sell a reservation for four to Jungsik, the two Michelin-star modern Korean restaurant in Tribeca. "Paid $1,366.08 for the signature menu in the main dining room," the Redditor wrote. "Sadly can't make dinner so posting here."

As the latest variant of the coronavirus continues to upend people's travel plans or nights out in their own neighborhoods, selling non-refundable high-end restaurant reservations has become more popular on subreddits like r/FoodNYC. It's become so prevalent that a pinned post from r/FoodNYC's moderators explains their rules for selling reservations through the sub.

For starters, they wrote, all reservations have to be sold for no more than face value, plus taxes and fees. ("One penny more than the exact amount you paid and you will be banned," the mods warn. "This is not Stubhub.") They also request that only non-refundable reservations are sold, and add that the moderators aren't responsible if a reservation sale goes sideways.

Other Redditors on the sub have posted to unload their pre-paid reservations at Tsukimi ("My wife is feeling quite under the weather today"); at Eleven Madison Park ("We can't go due to travel restrictions"); and at Atomix ("May not be able to make this").

According to Eater NYC, many of these fine-dining spots take reservations through Tock, which allows purchasers to transfer their pre-paid bookings to another user. "If a booking is prepaid and non-refundable it becomes the property, like a ticket, of the booking owner," Tock founder Nick Kokonas told the outlet. "They can sell it. If we see an IP address that is doing this multiple times, we block them and their associated email address accounts from buying future bookings as they are likely a scalper." (Today I learned there are restaurant reservation scalpers.)

Kokonas said that Tock's pandemic-related refund requests have hit their highest level since this all kicked off in March 2020, and the rate of cancellations has "more than doubled" since November.

Unsurprisingly, re-selling high-dollar reservations on Reddit isn't a totally new thing — and it's not limited to New York. Alinea bookings are being offered through r/ChicagoFood, and reservations for the two-Michelin-star Naka have been posted on r/FoodLosAngeles.

The r/FineDining sub has a weekly Reservation Exchange for this purpose, and a decent percentage of posts on r/TheFrenchLaundry are from people who are trying to unload their tables at Thomas Keller's venerable California spot. (And spare a thought for the optimistic posters on r/NomaReservations, who mostly seem to be looking for any availability at the eternally influential — and eternally booked — Copenhagen restaurant.)

Although it has to hurt when you realize you'll have to surrender a long-dreamed-about restaurant reservation, it's nice that you might be able to transfer it to someone who maybe didn't expect to have this opportunity. Assuming that person isn't a scalper, of course. 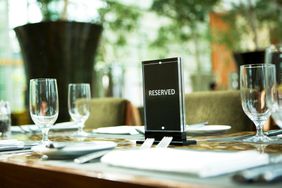