Seattle's fine-dining institution Canlis is shuttering its doors to launch a takeout, drive-thru, and delivery concept.

In its 70-year history, Seattle fine-dining restaurant Canlis has closed twice: once after JFK's death, and another after a major traffic accident. Starting Monday, March 16, it'll close for a third time. Sort of.

The James Beard Award-winning restaurant is shuttering its dining room amid the spread of COVID-19, but pivoting to three other concepts: a takeaway bagel shop in the mornings, a drive-up burger place in the afternoons, and for dinner, delivery-only.

"We saw a huge decline in business. Maybe up to 40% or 50% of our business just called to cancel," owner Mark Canlis tells Food & Wine. Google, Starbucks, and Amazon—all with offices in Seattle—instituted travel bans, meaning that out-of-town execs were no longer wine-ing and dining. Comic Con, slated for March 12 through 15, was postponed. No more business conventions either: hundreds of thousands of would-be visitors to the city, gone.

It was clear that this wasn't sustainable for Canlis. Something had to change.

More and more, that's what chefs across the country are coming to terms with. Even if they take above-and-beyond precautions in the light of coronavirus, it's appearing that business simply can't run as usual—if at all.

On March 11, iconic Seattle chef Tom Douglas announced the temporary closure of 12 of his restaurants. As he told The Seattle Times, sales had declined 90% in days prior. Elsewhere in the city, Restaurant Business Online reports that at least six other restaurants have closed—for good. If Tom Douglas's countless James Beard awards can't better immune him from closing doors, it paints a bleak picture for others.

Washington State currently has the highest number of confirmed COVID-19 cases in the country, as of this writing. And officials think it's going to get much, much worse. All across the United States, chefs are scrambling.

READ: The F&W Pro Guide to Coronavirus: What Restaurants Should Know

In light of this, Canlis provides a hopeful model for business survival. Over the past eight days, owners Mark and Brian Canlis have updated their kitchen with industrial fryers and mixers, preparing to turn out fries for 1000 people and knead dough for hamburger buns. They've added delivery drivers to their insurance. They've updated their website—it took their designer pulling an all-nighter before the announcement, finishing up at 7:30 in the morning. And it took a lot of help from friends.

"We've had people donate equipment to us, which is pretty amazing," Canlis says. Dave Ellingson, of restaurant supply company Bargreen Ellingson, had dinner at the restaurant two nights ago. "And he's like, 'Hey, I just heard what you're doing. What equipment do you need? You can take anything from our test kitchen.'" People have donated to-go containers. The community has rallied around this restaurant.

Canlis's team of waiters, piano players, valets, and office staff totals 150. And some of them are pivoting to different jobs. Some are similar to what they were doing before, some not—but at least they get to keep their jobs. And that was a lot of the reasoning behind launching not just one, but three separate food concepts. "If we look at it and we say, okay, we've got to create 150 jobs, and takeout doesn't do it. It just doesn't," he says.

And it's not just about the employees. It's also about the farmers, ranchers, and fish producers the restaurant keeps in business. "Our duck farmer is like, 'Hey, are you guys shutting down?' and we're like no, we're making cassoulet every Monday. We have a lot of farmers that have called being concerned," Canlis says.

The restaurant had some advantages in launching this transition. It's a stone's throw from the highway, for example, making it the perfect drive-thru spot. (Drive-thru meaning that customers pull up in their cars, get their food hand-delivered, and never have to get out.) "We thought, we have a parking lot and we could serve 15 cars at once. McDonald's can't even do that," Canlis says.

READ: How Coronavirus Is Impacting the Food Industry

He acknowledges that every restaurant isn't equipped to pull off drive-thru, but takeout is actually pretty accessible. A lot of the operational elements stay the same. "Servers are still servers," he says. "They're just doing it in a car."

Canlis's at-home delivery—dinner-only—will consist of one option a night. Perhaps cassoulet. Perhaps fried chicken. There's one catch though: it's not like UberEats or Postmates, where you can request dinner on the spot. Instead, you'll have to reserve it in advance, just like you would a standard dinner reservation. The plus side is, deliveries will actually be on time. No more waiting an hour and a half for poke bowls. Already, the restaurant has gotten so much interest that reservations might be hard to come by.

Canlis's move has got other restaurants thinking. "There's a bunch of chefs in the city that are all having this same discussion," he says. "I was on the phone with one team today who was just saying, 'Hey, we were trying to figure out how not to lay people off. How did you guys do this? Can we get your playbook?'" One farmers' market called, asking for help setting up a CSA delivery.

Countless restaurants are attempting to boost delivery and take-out sales as their dining rooms suffer, which helps keep staff employed. As The Washingtonian reported, D.C.-area Neighborhood Restaurant Group is launching delivery and takeout at all of their 20 locations in the coming week. More broadly, apps like Postmates have already rolled out no contact deliveries: drivers can leave food outside customers' doors. This is an option that restaurants are also making drivers and customers aware of via newsletters and social media posts.

While Napa's Charter Oak is keeping its dining room open, it encouraged diners to consider take-out in a Friday afternoon newsletter. "With these trying times, we know that you may prefer to enjoy our cooking in the comfort of your home," it read. "We will continue to offer all of our menus for take out."

As food is the one industry that just can't work remote, Canlis is hopeful that this model will help other businesses. "If we can get other restaurants to do it, that'd be awesome," he says. 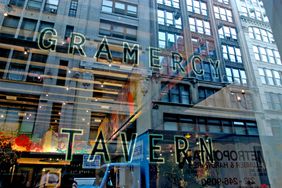 Danny Meyer Restaurants Shut Down Due to Coronavirus Concerns