You can drink the DIGITS Bourbon-inspired tea alone or spike it with more bourbon.

Scottie Pippen, the iconic former Chicago Bulls basketball player with six NBA championships under his belt, is making a spirited foray into beverages. "It's something that I'm trying to find my lane in," Pippen told Food & Wine during a phone interview. First, he launched DIGITS, a five-year Tennessee mature bourbon that launched earlier this year and won a gold medal for its 97 point rating at the Sunset International Spirits Competition.

The bourbon, named after the superstar's gigantic hands, is aged at renowned Napa Valley winemaker Dave Phinney's Savage & Cooke Distillery in California. Those same famous hands grace the packaging for Pippen's winter-time response to his whiskey, a limited-release DIGITS Bourbon Barrel Aged Tea in partnership with Smith Teamaker that launches on December 5.

"I got a reputation of working with the best," Pippen said. "Smith Teamaker is king in this business as one of the top tea companies in the world." Pippen's bourbon-inspired tea launches on December 5, also known as Repeal Day, marking the moment in 1933 when President Franklin D. Roosevelt repealed the 18th amendment and ended the 13-year prohibition.

Pippen's earliest memories of tea trace back to his childhood in the South. "I grew up drinking sweet tea and have continued to drink it all my life," Pippen said. His mom would always have a pitcher of iced tea cooling in the refrigerator. Later in life, he turned to tea for medicinal purposes. "It's soothing and healing," he said. "I use tea if I got any kind of congestion. I'll make it with mint or ginger."

His childhood fondness for sweet tea eventually developed into his love of black tea. "The last few months I've tried different teas—like red tea. I tend to kind of go back to black tea," Pippen said. "Black tea reminds me of growing up in the South and drinking sweet tea with a darker color."

Naturally, his blend features three full-leaf black teas: Assam, Ceylon, and Keemun Chinese black tea (known as the queen of black tea and only grown in Qimen County in the Huangshan City of Anhui Province). And then there is the bourbon aspect. Ravi Kroesen, head teamaker at Smith, worked in collaboration with the Olympian to create blends that incorporate the notes inherent in DIGITS whiskey.

Teamakers soaked the tea in DIGITS bourbon before aging them in DIGITS charred oak bourbon whiskey barrels for five months. Then, they blended the tea with ingredients like vanilla, cinnamon, and coconut, offering notes of caramel, butterscotch, and tobacco. The tea has an alcohol content of around 0.03%, which is below the 0.5% requirement for beverages to be deemed non-alcoholic.

Pippen sips his tea all day long. He wanted to make a tea he could sip in the evening with a shot of bourbon to wind down. "Normally I get up in the morning and feel like having something hot to help with digestive systems, and at night I'll have tea again just before or right after dinner," Pippen said. "You can pour a shot into the tea after it's seeped or use the tea to chase your bourbon. It's very soothing and perfect for a chill time." 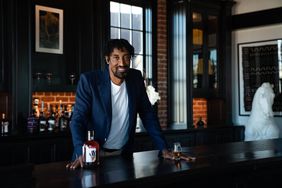