Never in my half-decade career as a food writer have I experienced such a dramatic build up to dinner. I arrived at the Scientology Celebrity Centre, an ominous castle-like structure at the base of the Hollywood Hills, at 7pm. I parked my scratched 2005 Ford Escape in the lot right between the polished Mercedes and BMWs, then bee lined for the building. I made sure not to allow myself a single moment to actually consider what I was getting myself into—but my reactive mind was begging me to run.

I walked past a manicured garden and a pleasant-looking cafe. So this is the Soho House of cults. I get it. One man who was definitely staring at me—come to think of it, everyone was staring at me—approached and asked, "Do I know you from somewhere? You look familiar. Do you come here a lot?" "No, first time here!" I blurted before continuing my walk-run to the lobby in a heightened state of paranoia.

I made it into the building (a 1927 replica of a French-Normandy castle that functioned as a hotel and home to the likes of Errol Flynn and Humphrey Bogart before being purchased by the Church in 1973) and spotted my dining companion, who I will refer to as Candy Santana to protect her identity and save her from a lifetime of harassment after this article is published. I questioned how I was able to convince this poor soul to accompany me on a self-imposed journey into Scientology's underbelly. I don't think she'll ever forgive me, and I don't blame her, but thank Xenu and the Galactic Federation I wasn't the only "suppressive person" on the Celebrity Centre grounds that night.

Once we announced we were at the Centre to take a tour and eat dinner—something anyone can do if they're so inclined—a tall, youthful man I can only describe as high school quarterback-esque appeared to show us around. He asked us a couple personal questions and had us try out the E-meter, an electronic device scientology auditors believe measures the response of the reactive mind and looks like a torture device you could get by mailing in proofs of purchase from cereal boxes in the '90s. Does that sound disturbing? Well it is, but it's not nearly as disturbing as what happened next.

After we took dense and probing personality tests, our tour guide put our answers through a machine that spit out an assessment of our flaws. Candy and I were then escorted into separate rooms. The high school QB told me that I am severely depressed, anxious, and irresponsible, with a low level of logical reasoning and appreciation. "But that's just what you think of yourself," he assured me. The good news was I could pay to take a handful of courses that would let me overcome my inadequacies, leading to a life of freedom and happiness. Additionally, I could enroll in something called an Effective Purification Program, which would help clear my mind and flush my body of toxins. How very LA!

At that point, I was emotionally drained and wondering if I needed to be saved from myself. But there was no going home. It was time for dinner. The interior of the Celebrity Centre's Renaissance Restaurant reminded Candy and me of Cinderella's castle at Disneyland, complete with faux ivy and trellises painted on the walls. "Is this what Dubai is like?" asked Candy. We ordered a bottle of red and unconsciously gravitated towards comfort food—more specifically, fettuccini alfredo and steak frites. We devoured the steak, which looked grey and petrified, but came with surprisingly decent French fries—they tasted like McDonald's—and pasta drowning in butter and cream.

We gulped down our wine and commiserated in hushed voices about how vulnerable and uneasy we felt. Our waiter, who just so happened to be a member of the Sea Org (Scientology's clergy, whose sometimes tortured existence was recounted in a New Yorker article and further detailed in the book and subsequent HBO documentary Going Clear), asked if we wanted dessert. We politely said no thank you, and that the lifeless steak was quite sufficient. Moments later, he returned to our table and told us he was going to list off the desserts in the interest of "following protocol." After he rattled off the ice cream flavors, we assured him we were full, and explained that we needed to get the hell out of the building.

We escaped the premises—or so we thought—and were walking through the parking lot when the attendant said, "Have a good evening, Candy." That's when my friend turned to me and said, "Holy f*ck. I did not tell that man my name." After shivers went down our respective spines, we crossed Franklin Avenue to have a night cap at La Poubelle and debrief. The world seemed much more starkly real than when we left it three hours before—there were people drinking wine, making out and smoking cigarettes. Were they all trapped by the negative influence of their subconscious and ultimately doomed? Candy and I found a table, ordered more drinks, and acknowledged how easy it would be to convince yourself you could be saved by Scientology. 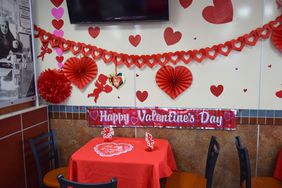 I Ate Valentine's Day Dinner Alone at White Castle, and You Can, Too