Read the label before you spending your money.

First, here's the scoop on San Marzano tomatoes: Much like a Chianti must be made in the Chianti region of the country to be labeled as such, San Marzano tomatoes are special plum tomatoes that must be grown in Agro Sarnese-Nocerino. When they are canned, they come with a DOP emblem on the label, marking their authenticity.

How are these fraudulent fruits making into the U.S. marketplace, you ask? Even importers are scratching their heads. "We see all these crazy, sketchy things," Danielle Aquino Roithmayr, a food importer with Gustiamo, told Taste. "Italians will send tomatoes to the U.S. with no label, and companies here will put a DOP label on. ...You can't put a USDA Organic label on anything, but DOP is not regulated here." That leaves less-then-scrupulous companies an opportunity to slap whatever label and designation they want on their tomatoes—even if they're not grown in Italy.

That's a bummer. But, you can protect yourself from San Marzano tomato fraud with this simple trick: real San Marzano tomatoes are sold whole or in fillets, and they're always peeled and canned, Roithmayr said. So, if you spot a can of diced San Marzano tomatoes, you're looking at a fake. Also, some brands even flat-out say the're not from Italy in the label's fine print. The real deal will also have the DOP seal and a Consorzio San Marzano certification number on the bottom of the can. With both, you can know you're getting something good—and not wasting your money.

Does Vintage Always Matter?
25 of Our Favorite Under-the-Radar California Reds 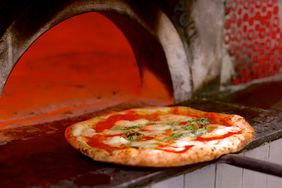