Purple-skinned tomatoes already exist, but this new breed is purple all the way through.

Everyone always repeats that "good things come to those who wait" line, but they don't always add that sometimes the waiting can stretch on for ages. In biochemist Cathie Martin's case, it took almost 15 years for a genetically modified purple tomato to receive regulatory approval from the U.S. Department of Agriculture.

"This is fantastic," Martin said in a statement. "I never thought I would see this day. We are now one step closer to my dream of sharing healthy purple tomatoes with the many people excited to eat them."

Martin and her colleagues at Norfolk Plant Scientists (NPS) have been experimenting with pigment production in flowering plants for more than two decades, and they've spent almost 15 developing this vibrantly hued tomato. According to NPS, their focus has been on anthocyanins, the antioxidant-rich pigments that give blackberries and blueberries their signature shades.

"Domesticated tomatoes already have genes to produce anthocyanins, but they are not 'turned on' in most fruits," BigPurpleTomato.com explains. "By carefully adding two genes from snapdragons that work like 'on switches,' our tomatoes and juice are a rich source of antioxidants, because purple pigments are made in the whole tomato, not just the skins."

Before you ask, yes, there are already some purple-skinned tomatoes out there, but the pigments mostly stop at the outer layers and don't accumulate in the fruit itself. NPS also acknowledges that you can take supplements to increase your all-around antioxidant levels, but "there is increasing evidence to show that they work much better when consumed within foods."

And after a Regulatory Status Review issued by the USDA Animal and Plant Health Inspection Service (APHIS) earlier this month, we're all a little closer to seeing purple tomatoes in the supermarkets or getting packages of seeds for our own gardens. "The tomato was modified to alter its color and enhance its nutritional quality," APHIS wrote in its official OK. "We found the plant is unlikely to pose an increased plant pest risk compared to other cultivated tomatoes [...] That means, from a plant pest risk perspective, this plant may be safely grown and used in breeding in the United States."

"This decision is a big milestone, which brings us much closer to a commercial launch of purple tomatoes," Nathan Pumplin, the CEO of NPS' U.S. based commercial business, said in a statement. "We are optimistic that we can begin limited distribution of purple tomatoes in the US in 2023."

In other words, we're all going to have to wait just a little longer. 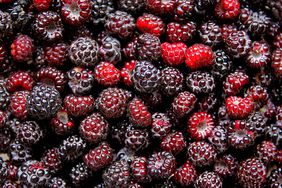