The ring is now available for custom order from U.K. jeweler Angelic Diamonds.

Angelic Diamonds — a self-described "customer-focused jewelry company specializing in the design and manufacture of fine diamond jewelry" based in northern England — whipped up the £10,000 ring (a mere $10,800 at the current historically-favorable exchange rate) to "add a little spice to proposals" this fall.

The brand says that "every detail is inspired by pumpkin spice lattes" starting with a rose gold band "designed to replicate the rib shape of a pumpkin" with white diamonds, orange sapphires, and emerald shoulder stones down either side. From there, the ring features a single "whipped cream shaped" center diamond surrounded by a cluster of white diamonds and orange sapphires "set in a cup-shaped claw, reminiscent of a warm cup of pumpkin spice-goodness."

As an added touch, the words "Pumpkin Spiced" are engraved on the inside, lest you take the ring to your grave and its found by archaeologists hundred of years into the future who may not immediately recognize its pumpkin-spiced inspiration on first glance.

Then, finally, the whole thing is housed in "luxury Pumpkin Spice Latte packaging": a limited-edition PSL ring box with a pumpkin spice-scented interior, a cardboard coffee cup wrap, and a pumpkin closure latch.

Sound up your alley or the alley of your significant other? There's no need to rush. Angelic Diamonds says the ring is available through their Bespoke Design Service, meaning they can brew up a fresh PSL ring for any interested parties willing to fork over the cash — and you can even ask to have the design tweaked to your liking or incorporate something that's specifically meaningful to you. It's just like adding customization to a Starbucks PSL… except that, we're guessing, these customizations will cost more than a bit of extra pocket change.

You can put in your request to buy one of the rings through the Angelic Diamonds website. 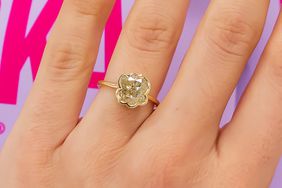