Last August, a Brooklyn man went briefly viral after tweeting a picture from a LaGuardia Airport restaurant, one that charged $27.85 for a single glass of Sam Adams Summer Ale Draught beer. The rest of the eatery's offerings had equally jaw-dropping prices printed beside them, and the "bargain" option was a $13.05 Michelob Ultra.

"It's just Sam Adams Summer Ale," Cooper Lund told The City, shortly after he snapped that pic. "That's insane." A second traveler shared a photo of a $10.90 serving of French fries that was on offer at Newark Liberty International Airport, and those two tweets got the attention of the Port Authority of New York and New Jersey's Office of Inspector General (OIG), who pledged to investigate why (and how) those prices were so high, even by airport standards.

According to NJ.com, the OIG has completed its investigation, and learned that 25 customers were charged between $23 and $27 for a beer last summer — an amount that officials described as "totally indefensible" — and they were all given refunds for those purchases.

The OIG also published 35 pages of policy guidelines for airport concessionaires, and the biggest takeaway is that it has set a maximum price cap for New York and New Jersey airport concessions at "local street prices" plus a surcharge of 10 percent. It also will require concessionaires to offer additional lower-priced options — think combo meals and other values — so travelers have some slightly more reasonable food and beverage choices. In addition, "brand name concessions" like chain restaurants and coffee shops can use other local locations of the same chain to set their prices.

"All airport customers should rightly expect that policies which limit the pricing of food and beverages at concessions will be followed and enforced," Port Authority Chairman Kevin O'Toole said in a statement. "Nobody should have to fork over such an exorbitant amount for a beer. The Aviation Department's new compliance and enforcement measures announced today make it crystal clear that all prices at concessions will be routinely monitored to ensure they are aligned with the regional marketplace. And all airport customers and concessionaires should expect tough pro-active enforcement going forward now that these revised standards are in place."

Meanwhile, OTG, the New York-based company that runs the restaurants and other retailers at John F. Kennedy, LaGuardia, and Newark airports (among others) says that the $27.85 beer and the $10.90 French fries were the result of an employee's fumbling fingers. "This is a situation where someone simply input the wrong prices," OTG spokesperson Michael Marchese told The City last summer. "Once we learned of it, we immediately took action to correct and began proactively auditing our entire system to ensure there were no other mistakes." (The actual prices were supposed to be $18.15 and $8.45, respectively.)

If any air traveler in New York or New Jersey sees completely bonkers-seeming food or drink price, the OIG would appreciate it if they'd let them know on social media. At the very least, your picture of an exorbitant domestic beer might go mildly viral. 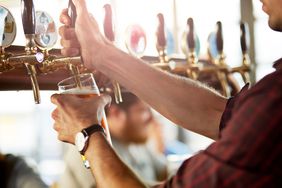