The Pac-Man collab is just the start of Pizza Hut’s new nostalgia-driven ad campaign, which will bring back Book It! pins, red cups, and old menu items.

Not that Domino's didn't have the Noid (cough), but as far as America's big pizza chains go, Pizza Hut is most likely to trigger a sense of nostalgia. For one, unlike other places, Pizza Hut has historically had a larger focus on dining in: the distinctive red roofs, the stained-glass lamps, the pans and buffet—much of what lured us into Pizza Hut as kids can't be replicated at home.

However, as part of a new nostalgia-driven campaign, Pizza Hut has figured out how to bring one dine-in fave to delivery: the arcade games. Thanks to the latest in technology, pizza fans can now play Pac-Man on their cardboard pizza box.

Yes, Pizza Hut has officially partnered with Pac-Man for a limited-edition "playable" Pac-Man box—where retro-gaming bliss can be achieved through the not-so-retro help of augmented reality on your smartphone. Simply order a large pizza and scan the QR code on the box to play—no app needed. And as an added incentive, the chain is also giving players a chance to win an Arcade1Up Pac-Man game cabinet. To enter the sweepstakes, follow the prompts to share your score on Twitter and, you'll be entered to win the April 3 drawing, no matter how many dots you munched.

"Pac-Man's design and creation was inspired by the shape of a pizza with a slice taken out of it, making this partnership so appropriate for the Pac-Man brand," Yutaka Fuse, head of licensing and branding at Pac-Man maker Bandai Namco Entertainment, said in the announcement. "Pac-Man games and Pizza Hut pizzas occupy a special place in many people's memories; we're excited to have the opportunity to create fun memories for a new generation of Pac-Man and Pizza Hut fans through this collaboration."

Speaking of fun memories, Pac-Man is just the beginning of Pizza Hut's new "Newstalgia" campaign, which promises to bring back all the favorites of Pizza Hut past: Book It! pins, red cups, and classic menu items of yore.

"Throughout the year, Pizza Hut will be fueling pizza lovers with new innovation, bringing back iconic pizzas and tapping into entertainment and pop culture in new and unexpected ways," the company says. Is anyone else suddenly inspired to watch Genesis's "Land of Confusion" video with all those super creepy puppets or is that just my personal Pizza Hut memory? 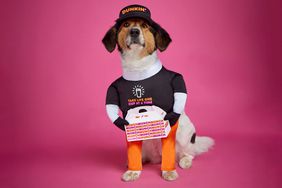