The People’s Best New Bars award, presented by Roca Patrón, is Food & Wine’s first-ever poll to rank the most incredible drink destinations in the country. We want to know what you think are the most innovative new bars in the Northwest region.

Bellevue, WA
In a venue known for its reinvention of the classic gin and tonic, bar manager Evan Martin makes a version with lime, lemongrass and spices. Other stellar drinks include Greenpoint (with rye, Chartreuse, vermouth and bitters) and No. 5 (with rum, elderflower cordial, bitters, grapefruit and lime). barcodebellevue.com

Omaha
Pre-Prohibition drinks are the specialty at the Berry & Rye, in Omaha’s Old Market. The impressive list of handcrafted cocktails includes Flowers for Chavela (photo), made with mezcal, hibiscus and raspberry syrups, lime and rose water. theberryandrye.com

Seattle
This Pioneer Square restaurant and bar has an exposed-brick interior, and offers house cocktails such as The Woodwork: Made with rye and orange Curaçao, the drink is dedicated to the company that built the bar and tabletops. The Agricultural Punch (photo) includes rhum agricole, raw sugarcane juice and lime. damntheweather.com

Portland, OR
Expatriate’s decor puts Kyle Linden Webster’s cocktails (like the Royal Hawaiian, a mix of gin, fresh lemon and orange, pineapple gomme syrup, fresh orgeat and bitters) at the forefront. Patrons can order anything from the menu, but only the liquors used in his signature drinks are displayed behind the bar. Naomi Pomeroy, an F&W Best New Chef 2009 (and Webster’s wife) designed the snacks menu. expatriatepdx.com

Portland, OR
In the lovely Hotel Lucia, bar manager Brandon Wise prepares inspired craft beverages, like A Radish Walks into a Bar… (photo: vermouth, Ransom Old Tom gin and radish gastrique) as well as cocktails on tap and a nice selection of mocktails. imperialpdx.com

Portland, OR
Headed up by the mixologist and star booze blogger Jeffrey Morgenthaler, the basement bar Pépé Le Moko serves classic cocktails, plus its stellar signature drink, an Amaretto Sour (photo) made with overproof bourbon. pepelemokopdx.com

Seattle
In the heart of Seattle’s Pike Place Market, Radiator Whiskey boasts an impressive list of assorted spirits. The cocktail list offers five spin-offs of the classic Manhattan, made with spirits like smoke-infused rye and moonshine, as well as cocktails like the Water Line (photo), which includes rye, aquavit, Cynar, Cointreau and orange and black walnut bitters. radiatorwhiskey.com

Portland, OR
Inspired by the 1883 building that houses Raven & Rose, some of bar director David Shenaut’s concoctions are complex and Victorian-themed, like the frothy Absinthe Frappe. Others are bright and fresh: the Garden & Farmers’ Market Cocktails section of the menu includes the Improved Cape Codder (photo), with vodka, cranberry, Jacobsen sea salt and Campari. ravenandrosepdx.com

Seattle
Seattle’s self-described first rum bar, Rumba provides a selection of more than 250 rums and specializes in island drinks such as tiki cocktails, punches and more. The list has both traditional and original daiquiris, like the Presidente (made with rum, Curaçao, grenadine and vermouth), and other Caribbean classics like Queen's Park Swizzle. rumbaonpike.com

Portland, OR
Created as a special tribute to cafés in Lyon, St. Jack offers a variety of French-inspired cocktails, from the Savoie Spritz, made with vermouth, Génépy, cucumber, lemon, Douglas fir and sparkling wine, to the Cognac-laced Champagne Punch (photo). stjackpdx.com

Omaha
Reminiscent of a basement lounge from the ’70s, with vintage lighting, a mountain scene on one of the walls and a sound system that was purportedly once owned by the Carpenters, the Trap Room boasts a large cocktail menu that features Moscow Mules in copper cups, classic Old Fashioneds (photo) and margaritas on tap. thetraproom.com

Seattle
Witness is decorated like a Southern Baptist church, and its menu offers a variety of cocktails including I’m Your Huckleberry (berry-infused vodka, lemon and huckleberry cordial drizzle) and Soul Tonic (with aromatic lime cordial). witnessbar.com 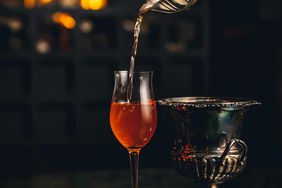