'Pea Gin' Could Be a Breakthrough for More Environmentally-Friendly Cocktails

A team of researchers distilled gin from peas and were pleased with the results.

Though the hype has settled a bit, gin is still a buzzworthy spirit that's brushed off the dust to once again emerge as a hip liquor cabinet go-to. But a new study suggests that there's a way gin could be even more on-trend: if it was even more environmentally-friendly by being made from peas. Yes, pea gin could potentially be the next big thing.

Looking to reduce the carbon footprint of producing spirits, a team of 11 researchers recently published a paper suggesting that using peas instead of grains might be the answer. And though these scientists believe that peas could work as the base for a lot of booze including vodka or even beer, they've already tried making gin from peas and were encouraged by the results.

"We found that the environmental footprint of pea gin was significantly lower than for wheat gin across 12 of 14 environmental impacts evaluated, from climate change, through water and air pollution, to fossil energy consumption," Pietro Iannetta, a molecular ecologist at the James Hutton Institute who was part of the study, explained according to Trinity College Dublin.

Of course, when it comes to good booze, taste is of the utmost importance, so in the name of science, these researchers teamed up with Scotland's Arbikie Distillery to produce some test batches of gin made from milled dried peas. Once the botanicals were added, Kirsty Black, manager of the distillery, gave the final product her thumbs up. "Following two distillations plus an infusion with botanical ingredients including juniper and coriander, the final gin retains the same sumptuous, aromatic flavor as if made from cereal grain," she stated.

However, Mike Williams, a botanist from Trinity College Dublin's School of Natural Sciences and another member of the large research team (everyone wants in on the gin study, apparently!), pointed out that peas begin working their magic well before they hit the distillery. "Peas — working with specialized bacteria in their roots — are able to convert nitrogen from the atmosphere into biological fertilizer," he stated. "As a result, they don't require applications of polluting synthetic nitrogen fertilizers, which are widely and heavily used in industrial agriculture. Furthermore, pea hulls and distillery co-products provide protein-rich animal feeds that can replace soybean imported from Latin America, where cultivation is driving deforestation."

So yes, though pea gin might sound odd at first, these researchers believe it could help fight deforestation, and when everything is taken into account, this unlikely liquor may even be carbon neutral. Sounds like a great way to feel less guilty about having another gin and tonic. 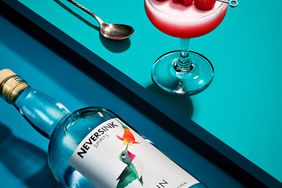