Lionel Poilâne is a revered, ultra-traditional baker; his wife, Ibu Poilâne, is a modernist designer. A fantastic dinner at their Paris apartment shows why opposites attract.

Dinner in Ibu and Lionel Poilâne's dining room, three floors above the world's most famous bakery, combines classic and modern styles to create something that transcends both. Lionel, of course, is the traditionalist who reminded the French of their culinary roots when, at age 20, in 1965, he took over his father's bakery on the Rue du Cherche-Midi, in Paris's sixth arrondissement, and refused to make baguettes, which are often more picturesque than flavorful. Instead he baked the wide, round loaves now known around the world as pain Poilâne. These sturdy four-pound disks look like something medieval pilgrims would have packed for the Crusades, with a thick and crunchy crust, a slightly chewy texture and the tang of slowly risen sourdough.

While Lionel was building an empire on a foundation of traditional baking, his wife was developing her own style. Born of Ukrainian parents, Ibu spent her first thirteen years in Poland, then moved to New York City, where she earned a degree from the Pratt Institute of Design. Thanks to professors like Joe d'Urso and Ward Bennett, she acquired an austere Bauhaus aesthetic that she has never abandoned. After graduation, she designed store interiors for Bloomingdale's in Manhattan and Burdine's in Miami. Eventually she opened her own shop in Paris, Ibu Gallery, specializing in art jewelry--some of her own design, some by other modernists, such as Ted Muehling. After years of dividing her time between Paris and New York, Ibu now lives full-time in France and runs her own design studio. Recent projects have included a collection of bronze furnishings sold by Christian Liaigre and, for Chanel haute couture, a line of 18-karat-gold jewelry inspired by the simple form of the circle.

The Poilânes' contrasting styles coexist happily in the 16th-century building where Lionel began baking bread at age 14, and which Lionel and Ibu now own. The ground-level shop is pure nostalgia, with naïf paintings of wheat fields on the walls and piles of bread on the wooden shelves. Upstairs, however, Ibu's minimalist aesthetic shows in the transformation of a warren of tiny apartments into efficient spaces for Lionel's staff and her own design studio. It's also expressed in the whitewashed library she created for her husband's 2,000 books on bread and baking as well as his mementos, such as the framed cotton sacks that once contained American flour sent to postwar France through the Marshall Plan. (Now, with 5,000 mail-order customers in America, Lionel sends bread back.)

When she entertains, Ibu brings a Bauhaus strictness to her dinners: "The best food in the world can be killed by the wrong menu. Lionel likes traditional dishes in sauce, but if you serve a substantial boeuf bourguignon, you don't want anything as rich as chocolate cake for dessert."

A party might begin a few steps from the dining room, in the design studio, which seems to float among the rooftops. Apéritifs are voluptuous variations on the usual Kir, that combination of slightly acidic white wine and sweet and fruity crème de cassis. For her version, she uses fine red wines that she and Lionel inherited from her father-in-law and cassis or raspberry or peach liqueur. To go with these apéritifs, Ibu offers crisp slices of potato tart brushed with olive oil and sprinkled with sea salt.

Guests then move into the dining room, where light pours in through enormous windows that reach up to the old-fashioned glass-paned ceiling. They sit in leather armchairs at a square table topped with a slab of charcoal gray lava stone. Ibu decorates the table according to whim, sometimes leaving it bare, sometimes covering it with antique bed linens, occasionally opting for the purity of a sheet of white paper. As for the place settings, she says, "I have a weakness for plates, and I'm constantly buying them--old ones, new ones, three at a time or five or whatever. Then I mix them all up on the table." Wineglasses are simple and short-stemmed, purchased at a supermarket, and they're almost always filled with Bordeaux.

At the late-summer gathering photographed here, the meal starts with a pureed vegetable soup brightened with lavish amounts of fresh herbs. Afterward, Ibu serves an updated version of pot-au-feu. In place of the usual inexpensive cut of meat simmered for hours in broth, she selects a beef tenderloin, plunges slices of it into hot broth for only a few minutes and serves the pieces rare. With poached vegetables and an herbed vinaigrette as a sauce, it's the kind of light and vivid dish she loves.

When it comes to dessert, Ibu admits, "I'm not a sugar person, so I let my husband or the cook take care of it." Lionel simply goes down to his store to get apple tartlets. Made with hefty slices of fruit and a rustic crust, they counterbalance his wife's minimalist recipes--and prove that tradition and modernity can bring out the best in each other. 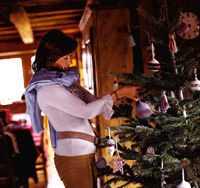 Christmas in the Alps