According to the Oscar Mayer website, on Thursday, its six Wienermobiles will be making appearances in Cleveland, Miami, Philadelphia, at two Walmarts in Texas, and in Chino, California, The rest of the month is equally as busy, as the iconic fiberglass hot dogs roll into every time zone in the continental United States.

But the Madison, Wisconsin-based company is willing to let one of those Wienermobiles make a detour to drive some lucky high school student (and three of their friends) to their prom. That's right: while everyone else rolls up in a rented limo or in whatever car they borrowed from their parents, some absolute legend is going to have the opportunity to be the King or Queen of the Wienermobile, at least for one night.

If you know a high schooler who'd be into this idea (or if you're 17 or 18 years old and are enthusiastically nodding your head), they can enter to win the ultimate prom night ride by making an original 60-second-or-less video for Instagram or TikTok, and posting it with the hashtags #OscarTakeMeToProm and #contest.

In the video, the contest entrants should explain why they should be chosen for the Wienermobile to drive them to prom, and they should include the details about where and when their prom is taking place. All submissions must be received by Oscar Mayer by 12:00 p.m. CST on Tuesday, May 3 (and yes, entrants may submit more than one video).

According to the contest's fine print, the independent judges will review the entries between May 3 and May 6, and they will be evaluated on their creativity and originality, and by how well each video "fits within the Oscar Mayer brand theme" and is "a fun expression of the challenge." The winning entry (or entries) will be notified by the official @OscarMayer account on Instagram or TikTok.

This isn't the first time that Oscar Mayer has made the Wienermobile available for special occasions: in late 2020, the company started allowing couples to request the Wienermobile's presence for their wedding proposals.

According to a spokesperson for Oscar Mayer, the company got the idea after one of their own Wienermobile drivers (or a "Hotdogger" in Oscar-speak) proposed to his own girlfriend in front of the unmistakable vehicle. "We wanted to extend this to our fans so everyone can have the opportunity of a 27-foot hot dog on wheels present during such an important life moment," Nick Guerten told Food & Wine at the time.

Who knows? Maybe one of the couples who take the Wienermobile to prom will eventually call it back for their eventual wedding proposal. Now that's a storyline worthy of its own hashtag. 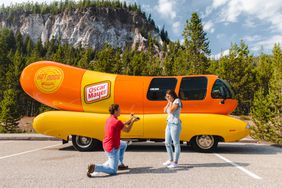 Want the Wienermobile for Your Marriage Proposal? Oscar Mayer Is Here to Help