The frozen treats are available at Popbar or from the Oscar Mayer Wienermobile.

It was an evolutionary leap for humanity. At some point, someone looked at a hot dog and thought, I could shove a stick up that thing and carry it around. Thus, the hot dog on a stick was born. Now, we stand at another crossroads, though this time the lasting ramifications seem less clear: Oscar Mayer looked at the hot dog on a stick and decided, What if we made it cold?

Debuting today, the "Oscar Mayer Cold Dog" isn't quite as unappetizing as it sounds on first blush. No, it's not just a frozen hot dog on a stick. Instead, this self-described "first-of-its-kind hot dog-flavored frozen pop" — crafted in collaboration with the frozen dessert experts at Popbar — is built from Oscar Mayer hot dog-tinged gelato, billed as "boasting both refreshing and smokey, umami notes." The brand says no actual hot dogs are used in the recipe; and yet, it still offers the "familiar and delicious notes of Oscar Mayer's hickory-smoked hot dogs, tomato, onion and more."

Finally, the whole thing is then finished off with a "mustard swirl," which Oscar Mayer says is mostly for visual flare. Made from white chocolate and yellow food coloring, the swirl only provides a subtle white chocolate taste, instead choosing to "reinforce the image of a hot dog, while keeping the classic hot dog flavor front and center."

Yes, the whole thing is bizarre — but that's by design. The Cold Dog actually began life as part of Oscar Mayer's "Stupid or Genius" marketing campaign. The concept created a stir on social media a couple months ago, and now, here we are.

"After the overwhelming fan excitement for our beloved Cold Dog, it was a no-brainer to make this hot dog-inspired frozen pop a reality," Anne Field, Oscar Mayer's head of North American brand communications, stated. "For more than 130 years, Oscar Mayer has been sparking smiles and bringing levity into everyday moments, and we are thrilled to bring fans another wonderfully odd way to enjoy our iconic wiener while beating the summer heat."

Want to try one? The Cold Dog will be available at select Popbar locations in Long Beach, New York City, Atlanta and New Orleans for $2 at pop while supplies last.

Or, if you're looking for more of an adventure, the Oscar Mayer Wienermobile will also be getting a Cold Dog makeover — frosted windows, icicle-inspired decorations and more — and will be traveling around offering Cold Dogs at popular summertime destinations in New York City and the Jersey Shore until August 27. You can track the famed vehicle's whereabouts on OscarMayer.com and the brand's Instagram account. 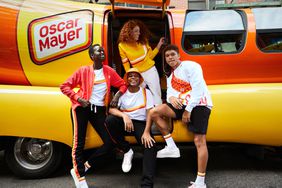