Poor air quality has forced restaurants in cities including San Francisco, Portland, and Seattle to make a new set of tough decisions.

The West Coast wildfire season is far from over, and already, it’s one for the record books, with massive blazes across California, Oregon, and Washington. Needless to say, battling the flames to save lives and property is the primary concern, but the damages don’t stop there. For instance, the wine industry is currently dealing with potential losses from smoke taint. And grapes aren’t the only ones adverse to smoke: Even in urban areas not directly dealing with fire, air quality issues are still forcing many restaurants—already ravaged by the effects of the COVID-19 pandemic—to close their doors again.

In Seattle, on Saturday, Eater listed about two dozen restaurants which were closing temporarily and another twenty-plus that were shutting down outdoor dining after the Puget Sound Clean Air Agency reportedly listed the city’s air quality as “very unhealthy,” a designation meaning that outdoor activities pose a risk for everyone, not just those with existing health conditions.

The day before, similar closures were reported in Portland, Oregon, after air quality issues forced Mayor Ted Wheeler to shut all city-owned outdoor spaces, with Eater PDX listing over 30 restaurant affected by the smoke. The city’s vibrant food cart scene is also especially vulnerable right now. “There really isn’t a way to not be affected by the elements and because of their small operating spaces, there is less wiggle room for how to make things work without compromise,” Josh Schimmel-Bristow, who runs the Mexican food cart The Meddling Lime, told Nation’s Restaurant News. “The difference really comes down to working conditions and if you’re indoors you’re going to have better systems in place for maintaining air quality.”

Further south, smoky air has been an ongoing problem in the San Francisco Bay Area, with the SF Gate reporting that some restaurants in the region were already curbing outdoor seating last month when the fires first began. More recently, on Friday, though Eater SF wasn’t keeping a running list of locations, the site did write that news of closures were “rolling in,” even in the immediate city limits.

Needless to say, with the year we’ve had, even having to consider shutting the doors again—especially for something unrelated to coronavirus—can feel devastating. “We still have to pay our rent, utilities, staff and vendors,” Gillian Shaw Lundgren, owner of the San Francisco’s Black Jet Baking Co., said, according to Nation’s Restaurant News. “Each day, each minute we are closed is catastrophic to our already severely damaged business.” 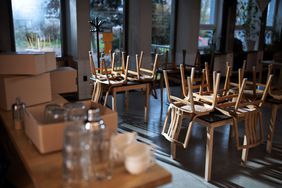